RS
This article is about the NPC. For the item, see Robin hood hat. 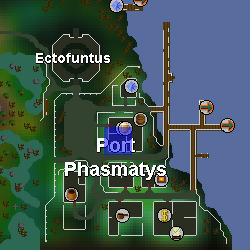 Robin Hood is a famous archer and one of the few humans in Port Phasmatys, where he can be found in The Green Ghost. Robin used to be the leader of a large gang, but they eventually left him under leadership of Dirk Turnip, since Robin forced them to live in the woods and wear ridiculous outfits. The gang became a group of highwaymen, mugging people on the roads, and were dissatisfied with Dirk's callousness, but they decided to stick with him, everything being better than Robin.

During Ghosts Ahoy, a game of Rune-Draw must be won against him. He wears a robin hood hat and ranger boots, and wields a longbow.

If you speak to Robin before starting Ghosts Ahoy, he will brag about his fame, ask you if you have heard of him, and finally ask you to do him a favour: bring him a clean bedsheet from the innkeeper. The innkeeper is in the bar just outside Robin's room. The bedsheet the innkeeper gives you is wearable, making you look like a ghost in keeping with the Port Phasmatys theme.

After the completion of the medium Morytania Diary, Robin will exchange bones for bone meal and buckets of slime daily. He will give 1 pot of bone meal (same type as the bones you give), and 1 bucket of slime for every bone you give him. He does not accept noted bones, and does not give noted items, so you will need free inventory space. He will exchange 13 bones per day after the completion of the medium morytania diary, 26 per day for hard diary, and 39 per day for elite diary.

Retrieved from "https://oldschoolrunescape.fandom.com/wiki/Robin?oldid=8694697"
Community content is available under CC-BY-SA unless otherwise noted.