View source
watch 02:53
GTA: The Criminal Enterprises - The Loop
Do you like this video?
Play Sound
RS
This article is about the quest. For the elves that the title refers to, see Islwyn and Eluned.

Roving Elves is a sequel to the

Regicide. It revolves around consecrating the tomb of King Baxtorian on behalf of his and

To find the start points, use this map. The elves teleport back and forth between the two spots every few minutes, so be patient or switch worlds if they're not there. If you don't find him after a couple minutes, it is much quicker to check the other possible locations.

There are several options to reach

Eluned to start the quest (listed below). Islwyn and Eluned move every few minutes to one of the orange circles marked on the map above. They are not in the spot near the bridge, so they can only be found south-west of

magic tree or north-east of

Tyras Camp at a glade. You will need to pass through dense forest, which requires 56

Agility, but it can be boosted with Agility potions from 53 Agility or

Summer pies from 51 Agility (bring more than one). It is also recommended you bring plenty of

Antipoison potions for the tripwire traps. If you arrive at one of the locations and the elves are not there, simply wait until they arrive or

Note: If you need to navigate the entire Underground Pass, please see

Port Tyras. This has several major advantages over other methods of transportation, with the only downside being the cost of 3.2k (or 1.6k with the

Ring of charos(a)). This route avoids all trip wire traps, and is the shortest route to either of the start points of the quest. Furthermore, the

dense forest you have to pass through does not require 56

Agility in this direction. Note that this does mean you are unable to go back to Port Tyras if you do not have level 56 agility and nothing to boost. Bring teleports if this is the case.

Glarial's pebble, you can skip this section. Otherwise:

Do not take any armour, weapons, runes (for teleportation) with you, also don't bring a clue scroll along in your inventory. All capes, and gloves that gives bonuses are not allowed, including Ardougne cloaks and the Graceful Outfit!! However,

jewellery, including jewellery that gives stat bonuses (such as an

amulet of fury or

combat bracelet) are allowed, as well as Fremennik rings, such as the

Berserker ring. You can bring teleport tablets. Also, the

Event rpg, a weapon that lets you

melee at rapid speed, can be taken in. The

dramen branch and a

knife to make a

dramen staff will not work here.

You will have to kill one

moss giant unarmed; however, you can take

potions with you. It is suggested to use a

super potion set if you have them. Lots of food is suggested, as the giant could do a frequent max hit of 14.

Prayer can be used here, and a

In the tomb, you will find two aggressive level 84

moss giants, one just west of where you climb down the ladder, and one in a small room with a chest west of that. They use a slow, but accurate combined

magical melee attack, so they hit with both in 1 hit and can hit up to 14. You must kill one of them to get the

Items required: Consecration seed, Agility boost if not level 56. Recommended: Food, antipoison, coins or an Elf camp teleport, and an Ardougne or Camelot teleport for the next section.

Take the seed back to

Chartering a ship to

Take all the items for this part, and go to the

Waterfall Dungeon. If you don't know how, follow the steps below:

Islwyn to claim your reward. Pick either a

crystal bow or a

Tip: If you plan on completing the

Western Provinces Diary, choose the crystal bow as it's needed for a hard diary task. Or else you will have to pay 900,000 coins for a bow from

Islwyn or recharging a crystal seed with

Before leaving, it is recommended to speak to

Mourning's Ends Part I to receive the

Lletya. It can be started without having the required levels, however Roving Elves and

Sheep Herder must be completed. 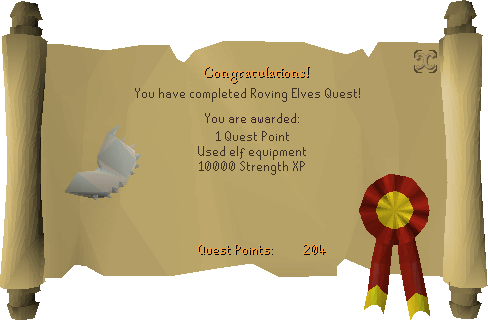 Completion of Roving Elves is required for the following: