Luckily, I can't see much of his face. 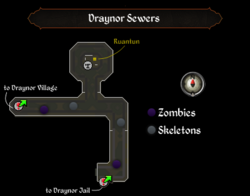 Ruantun is a weakened Vampyre found in the Draynor Sewers, living in the ruins of a small house. He appears in the Desert Treasure quest where he assists you in the process of summoning Dessous by crafting a silver pot. According to Malak (another vampyre), Ruantun used to work for Count Draynor.

He only appears in members' worlds, as Desert Treasure is a member's quest. In non-member worlds, all that appears in the sewer is the ruined house, a bed, a chair, and a burning fire, along with an anvil.

Retrieved from "https://oldschoolrunescape.fandom.com/wiki/Ruantun?oldid=8692219"
Community content is available under CC-BY-SA unless otherwise noted.