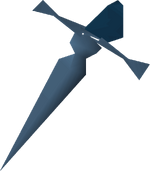 The rune defender is the 3rd strongest defender. It is used for its attack bonus and is held in the off-hand in place of a shield. It requires 40 Attack and 40 Defence to wield. The rune defender is dropped by Cyclops on the top floor of the Warriors' Guild. To enter, a player must have a sum of at least 130 in Attack and Strength levels combined. Players may alternatively attain level 99 in one of these skills and will be granted entry. Strength potions or Attack potions cannot be used to reach the level requirement. Players must show either an adamant defender or rune defender (player may obtain multiple Rune defenders if they want) to obtain this as a drop. The ring of wealth does not affect the chances of getting it as a drop.

The rune defender's slash and crush defensive bonuses are the same as a black kiteshield. However, its stab defence bonus is slightly less than an adamant square shield. It gives the same bonus to strength as the toktz-ket-xil (obsidian shield); however, it is much more commonly used due to its melee Attack bonuses. A rune defender is commonly combined with a dragon scimitar or an abyssal whip for its strength bonus.

The defender is popular among players of higher combat levels due to its offensive stats. It can be considered to be the third best off-hand item for melee training, only beaten by the dragon defender and Avernic defender, and is commonly used in PvP situations.