View source
watch 02:17
New Pokemon Games - The Loop
Do you like this video?
Play Sound
RS 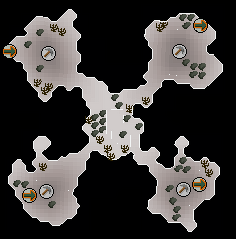 The Rune Essence Mine is a mine only accessible by being teleported there by various NPCs, which is the only mine where rune and pure essence can be mined apart from the Lunar Isle Mine. It is only accessible after Rune Mysteries, along with Runecrafting. Unlike the one located on Lunar Isle, this mine cannot be reached manually by players, due to it being sealed from all access except a specific spell.

In the past, wizards from the Wizards' Tower needing runes would face the great dangers of the Wilderness and pirates at sea before reaching the mine, which resulted in many deaths. Only in the Year 70 of the Fifth Age did Kelavan the Red, an apprentice of the Red Wizards at the first Wizards' Tower, accidentally discover how to create new teleportation spells when studying how to bypass defences with Combat spells - he discovered that teleportation spells can be created by having the wizards pass through a second plane of existence. After a series of events, a ritual was commenced to create a power beam to function as an anchor for all teleportation spells. At this time, the spell "Senventior Disthine Molenko" was created, which teleports wizards to the mine, omitting all danger. Due to a tragic accident, however, the tower was burnt down.

Archmage Perien of the rebuilt second Wizards' Tower blamed the Red Wizards and banished all Zamorakians from the tower, keeping the secret of the Rune Essence Mine teleport spell to the Saradominists. Zamorakian organisations, most prominently the Zamorakian Magical Institute, are still trying to steal their secret to this day.

Rune essence is a magical kind of stone which has the power to absorb magical energies in it. Runecrafters use this rune essence as a resource to create rune stones, which the wizards, in turn, use to cast Magic. Rune essence is a soft material that can be cut in many different shapes. The wizards of the Wizards' Tower used rune essence to shape the body of the Rune Guardian.

There are only two places in all of Gielinor where this very special kind of stone can be collected. One place is hidden secretly somewhere in the frozen north. This mine can only be accessed by a teleport spell, which only a few wizards know about. The wizards of the Wizards' Tower use this mine to collect their rune essence.

Rune essence exists of two kinds. One kind is a normal kind of stone and can be mined by even the least experienced miners. This kind is just called "rune essence" and players can only craft low-level runes with it. The second kind is a better kind of essence. This kind is harder to mine and is used to create both high-levelled and low-levelled runes because it is more pure. It is as such called "pure essence".

Teleportation and accessing the mine

To get there, you must be teleported by one of a few NPCs, who shouts the words: "Seventior disthine molenko!" Rarely, the teleportation goes wrong, and you end up in a small red room. Then, you must operate the odd appendix out, and are teleported to the normal mine, with a few noted pure or rune essence as a reward. There are a number of NPCs located around RuneScape that will teleport the player to the mine. Players can either talk to these NPCs and ask to go to the mine, or right-click the NPC and click the "Teleport" option to go directly to the mine.

The mine features four large essence outcrops that the player can mine from. Note that unlike other types of Mining rocks in the game, multiple players can mine from the same essence rock at the same time, and a single click will fill the player's inventory with essence. There is also a teleport located around each of the rocks that will teleport the player out of the mine.

There are three types of resources that can be obtained from this area: rune essence, pure essence, and dead trees.

Free players, or members with less than level 30 Mining, will mine rune essence from the outcrops. Each mined essence gives 5 Mining experience. Rune essence can be used with the Runecrafting skill to craft elemental runes (air, water, earth, and fire), mind runes, and body runes.

Paying members with a Mining level of 30 or higher will start mining pure essence from the mines. Pure essence can be used to create any type of rune available with the Runecrafting skill, apart from blood and soul runes.

Along with the rune essence outcrops, there are a few dead trees that are covered in snow around the mine. These can be useful for new players who want to train Woodcutting or Firemaking, although there are much better places throughout RuneScape to do so. 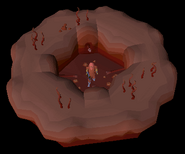