This map shows the secret way up to Death Plateau. 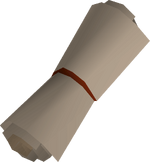 The Secret way map is a quest item used in the Death Plateau quest. It can be obtained by travelling to Tenzing's mountain-side cabin near Burthorpe and giving him a pair of spiked boots made by Dunstan the blacksmith earlier in the quest. The map should then be taken to Denulth, the leader of the Imperial Guard to complete the quest.

Retrieved from "https://oldschoolrunescape.fandom.com/wiki/Secret_way_map?oldid=8081406"
Community content is available under CC-BY-SA unless otherwise noted.