A mysterious ring that can fill the wearer with magical power... 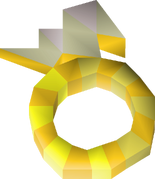 The Seers ring (i) is an upgraded version of the regular Seers' ring. It can be imbued as a reward from the Nightmare Zone, costing 650,000 reward points. Its stats are doubled compared to the seers' ring.

Dying to another player will cause the imbued ring to lose its imbued status, resulting in the player having to obtain the required Nightmare Zone Points to imbue it again.

On the other hand, if its wearer dies to a monster, the ring will retain its imbued status even if dropped on death.