The old diary of a former citizen of Meiyerditch. 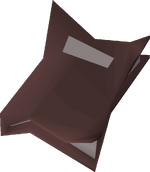 Serafina's diary is a book obtained from the Grand bookshelves in Verzik Vitur's treasure vault beneath her throne room, which can be accessed after defeating her in the Theatre of Blood.

The book details the personal thoughts of Serafina, and explains how she was transformed into The Maiden of Sugadinti.

I failed him. Everything I've done, I did for him. All the pain, all the suffering. All of it was for him. I just wanted him to live a good life. A happy life. I wanted something better for him. But I failed. I was foolish. I never even considered they'd come after us at our home. I should have been smarter.

It happened last week. It seemed like a simple deal at the time. Food for weapons, a fair trade. Things went south though. I thought I'd given them the slip but they followed me home. That's when he got involved. He should have let me handle it, I can look after myself. Not just myself, I used to able to look after both of us. Too late to dwell on what could have been though, what should have been. All it took was one cut, the blade must have been poisoned. Now, after everything, I'm losing the only family I have left. My baby brother is dying and it's all my fault.

I need to get help for him. I can't let him die, I won't let him die. They'll be tithing our sector in a couple more weeks and he won't be well enough to cope, if he even survives that long. I've heard of a doctor in sector five, maybe they can help. I don't have money but there are other ways to pay. Everyone has a price, if I've learnt nothing else from my life I've learnt that.

The doctor was a dead end. literally. Apparently the vampyres took him to Darkmeyer a few weeks ago. That makes him as good as dead, if he isn't already. It wasn't all for nothing though, just when I thought all hope was lost things took an interesting turn. As I returned home I was confronted by a strange looking man wearing a large medallion.

The human disguise didn't fool me, he was far to clean to actually live in this hell hole. He was a vampyre. I told him he didn't scare me, he just laughed. At that point he came closer and called me by my name. He told me he had a offer for me. One I wouldn't be able to refuse. It's not the first time I've heard that before, I'm no idiot.

Hope presents itself in mysterious ways. This strange vampyre claims to have a way to save my brother. I don't know how he'd heard about us, maybe I made too much noise when asking about that doctor. It doesn't matter now though. I have a chance to save him. I have to take it, no matter what it costs me.

The vampyre visited out home today. He wanted to present his offer to me. I took him down into the basement so we could talk in private. He told me about an operation which could cure my brother's illness. He offered no guarantees but claimed he was confident it would work, he just needed to ensure my brother was compatible. Nothing comes free around here, especially when the vampyres are involved. He had no reason to help us, he wanted something in return. I asked him what it was. When he told me, I felt a shiver go down my spine. At the point I questioned if it was worth the cost. Was my brother worth all of that pain? I didn't debate for long though. Of course he was. For my brother, I will do anything.

Not long to go until they take my brother. Apparently, they have a secret lab where the operation will take place. He'll be safe there, the vampyre promised me that. I asked him about my own operation. How much pain would there be? Would I remember anything afterwards? He was honest with me. By the time they're done, they'll be nothing left of the person I am now. I guess that's why I've been writing in this diary more. Soon it will be all that is left of me.

Today is the day. They'll take my brother first, there's no need for him to know what I'm about to sacrifice. By the time my operation begins, he'll be fast asleep recovering from his own. I know my brother better than anyone. He'll take a long time to understand my sacrifice. Maybe he never will. I hope one day he has the heart to forgive me.

I asked them to give this diary to him. Hopefully it will help. Brother, if you are reading this, know that everything I have done has been for you. I'm sorry.

Retrieved from "https://oldschoolrunescape.fandom.com/wiki/Serafina%27s_diary?oldid=8089978"
Community content is available under CC-BY-SA unless otherwise noted.