Make sure you have all the items you need BEFORE you go to Mort'ton. It's a really long walk to get to the bank from there unless you have done the quest In Aid of the Myreque and have repaired the bank in Burgh de Rott.

The quickest way to Mort'ton is with the use of Mort'ton teleport scrolls. Alternatively if you have access to Fairy rings, taking the ring with code bkr and running to the boat at The Hollows will be your second quickest option. If you are 50 Agility or higher, take the ring with code bip and use the hopping stone to the swamp. Another option is to use a Barrows teleport tablet, then run west. Also you can use a barrow teleport and head west to Mort'ton.

In order to start Shades of Mort'ton, you must head to the most southwestern house in Mort'ton and search the shelf on the wall to find a book. You should also search the smashed table, as it contains two Tarromin and Rogue's purse. The Tarromin will allow you to create additional potions later on, so hang onto those. The Rogue's purse is not used in this quest, and can safely be dropped.

Reading the book will now allow you to create Serum 207, a combination of a water-filled vial, tarromin and ashes. Using Serum 207 on the afflicted in town (those with specific names) will allow you to speak with them momentarily. Having multiple sets of the ingredients will allow you to create more potions if necessary, so it is recommended to bring multiple sets. Serum 207 may be traded, but you must make at least one yourself in order to use it for the purposes of the quest.

Make a Serum 207 (add ashes to a Tarromin potion (unf)), and use it on Razmire Keelgan in the general store. Razmire will ask you to kill 5 Loar Shades (the level 40 green shadows) and collect their remains. You must talk to Razmire before you kill five shades otherwise they will not count towards the requirement. You must also kill the five shades yourself, you cannot buy five remains off another player. When you're done (there will be a notice in the chat), return and use the Serum 207 on Razmire again, and he will take two of the shade remains from you.

Open the general store through Razmire and buy some olive oil. Then ask him to open the builders store, and buy at least one timber beam, one limestone brick, and five swamp paste per timber/limestone.

Now, proceed to Ulsquire Shauncy. He can be found in the house to the south-east, marked on the minimap as containing a water source. Give him a dose of Serum 207, and then one of your shade remains. Talk to him again, and ask what he learned about them; he will joke about rebuilding the temple and experimenting with the sacred flame. Also, ask him what can he tell you about the temple, which is located northeast of the general store, on a small island.

While defending/repairing the temple, you will receive a gradually increasing percentage of Sanctity. Sanctity is earned by killing Loar Shades or using your building materials to build/repair pieces of the temple.

In order to progress the quest, ignite the flame once the temple has been built and combine the olive oil with the sacred flame to create sacred oil. You will need 10% Sanctity to do this, which should be easily obtained during the temple build.

If you wish to cure the afflicted citizens of the town permanently (useful for the general store), use a vial of Serum 207 on the sacred flame with 20% Sanctity to create Serum 208. It is strongly recommended to use a dose of Serum 208 on both Razmire and Ulsquire to cure their affliction permanently.

After you obtain the sacred oil, cut down a dead tree, and use sacred oil on the logs to receive a pyre log. Then, head over to one of the funeral pyres, which are the brown patches on the map west of the General Store. Use the pyre logs on the funeral pyre, followed by the Loar remains. Light this and you will see a spirit rise from the pyre.

Collect your reward from the stone pillar next to the pyre and head back to Ulsquire. Speak with him to prompt the end of the quest (use a serum if he has reverted to being afflicted). 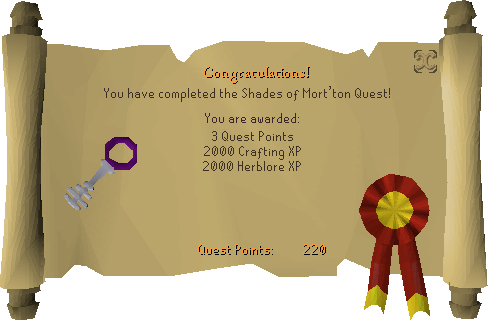