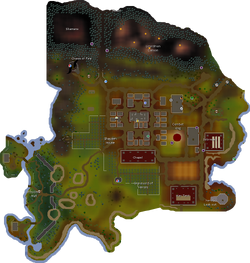 The Shayzien House in Great Kourend are the military force of the kingdom, providing law, order and defence for the region.

They are the police force responsible for dealing with crime in Great Kourend, in addition to defending the city against the lizardmen, evil creatures created by Xeric, a twisted wizard who reigned over Great Kourend in the past.

The Shayzien House is one of the more recent houses formed in the history of Great Kourend; it was founded by the legendary heroine Camorra Shayzien during the Dragonkin Conflicts 2,000 years ago.

The Shayzien House's architect is Shayda, who is found north of the bank.

Earning favour with the house will allow you access to a training ground found verging on the bloodlands, a desolate area that holds nothing but the mutated remnants of war. You will also be able to police the city to help keep order. Players with 5% Shayzien favour are able to fight lizardmen. Players will also be able to win tiers 1-5 Shayzien armour through the combat ring as the player earns more favour.

The city will provide more interesting and engaging ways to train without increasing the top experience rates in game.

Wounded soldiers can be found in the Infirmary. In order to heal the soldiers, players must use Shayzien medpacks on them, which are found in the small tent west of the infirmary. Players are given 0.1% favour for every healed soldier.

Once players have 5% favour, they are able to enter the Lizardman Canyon to kill lizardmen and their brute counterparts, who can inflict poison. Each lizardman killed gives the player 0.1% favour with the Shayzien House. There are two sections in the canyon; the west, where Lizardman shamans reside in, and the east where there are just lizardmen and lizardmen brutes.

The west side is locked and is only accessible once 100% favour is obtained with the house. One can quickly gain a lot of favour by cannoning lizardmen in the multi-combat areas of the canyon, though it can be somewhat costly. At 80 Ranged, it takes about 3000 cannonballs to get 100% favour. Alternatively, with completion of Desert Treasure and moderately high Defence, one can equip melee armour and repeatedly cast Blood Burst on very large amounts of Lizardmen in the eastern part of the Canyon to earn kills. Lizardmen have a 1/250 chance of dropping a Xeric's talisman which can be charged with fangs they drop to teleport around Great Kourend. Players can check lizardmen kill count by talking to soldiers in the canyon and inside of the Lizardman Caves.

Lizardmen commonly drop Xerician fabric which are fairly highly valued and will fill your inventory quickly, especially if using a cannon. So it is recommended to take a needle & thread to craft the fabric into Xerician robes (22 crafting required) effectively requiring less inventory space so that more can be carried in one trip.

Once players have 40% favour, they are able to talk to Captain Ginea in the building directly east of the combat ring to gain information on where organised crime meetings are taking place.

Every 30 minutes, a notice appears on the wall in Captain Ginea's tent. The notice gives the location of an organised crime meeting. After reading the notice, you are prompted to take a note to remind players of the location (needed if you want the house favour). The meeting lasts for five minutes.

Five minutes after the time they spawned, any remaining gang members will leave the area. Killing a gangster gives you 1% favour with the Shayzien House, while killing a gang boss gives 5% favour. Intelligence can also be found from killing gang members; gangsters uncommonly drop them while gang bosses have a 100% drop rate for them. This can be handed to Ginea for an experience reward (25*base level) in Attack, Strength, Defence or Hitpoints.

Participating in a gang bust is advised when possible, as they are a good source for oak, teak and mahogany planks. One can easily obtain 100% favour by going to multiple gang meetings when one appears, as they are not synchronised; it is also cheaper than cannoning lizardmen in the canyon. After finishing up one gang meeting, hop to another world. The meeting locations are the same in each world.

Main article: Shayzien Combat Ring
Once the player obtains 60% favour with the Shayzien, the player can challenge soldiers wandering around the Combat Ring in battle. The only rules when fighting them are that Magic and Ranged combat cannot be used during the battle.

The player must start from the tier-1 soldier and can rise up to challenge tier-5 soldiers in battle. Upon defeat, the soldiers will drop one part of their armour as a reward for the player. To challenge the higher ranked soldiers, you must have armour that is of their tier, or at least one rank lower than theirs. Without it, the talked soldier will redirect you to the lower ranked soldiers.