Shield of Arrav is a quest where the shield of the famous Arrav of Avarrocka has been stolen by organised crime syndicates in Varrock.

It is very important at this time to decide which gang you wish to join. This choice is important for two reasons:

Being a member of the Phoenix Gang is recommended if a player has lower combat levels, or is a skill pure.

Choosing the Black Arm gang is favourable as it makes the overall process quicker and easier for you as there are many more Phoenix members to match up with.

If your partner has combined the two half pieces to create the complete certificate or has completed the quest, they cannot obtain the half piece of the shield from their gang hideout - which means certificates cannot be obtained from them. If your partner is from Phoenix Gang, they can help you acquire the key to the weapon store only.

Warning: Although the majority of players in the OSRS SoA clan chat offer their services for free, some players also charge in-game money. Players should always be aware of the possibility of getting scammed when engaging in trust trades with other players.

Note: If you wish to join the Black Arm Gang, you can start the quest by simply talking to Charlie the Tramp and asking what is down the alley.

Talk to Reldo, located in Varrock's library, in Varrock Palace. Ask him for a quest, and he will tell you there is probably a book on something in the library. You have to now check the bookcase with a blue book in the top shelf. When you've found it, read or skim through it. After you've read the book, speak with Reldo and ask him about the whereabouts of the Phoenix Gang, but he tells you to go to Baraek, the fur trader in Varrock Square, because he doesn't know.

Ironmen can save 7708 coins while doing the Heroes' Quest later by picking the Phoenix Gang.

Items required: 20 coins, and a weapon (optional but recommended).

Baraek is located in the centre of Varrock. (To join the Black Arm Gang, go talk to Charlie the Tramp.) He buys and sells furs, and his stall is marked with an icon of bear fur. Talk to him and ask about the Phoenix Gang. At first, he will refuse, then he will want you to give him 20 coins for info. Give him 20 coins, and he will tell you it is located in the south-east corner of Varrock. Ask him all the questions available.

The hideout is near the south-east corner of Varrock between the two bars. It is a bit south of the rune shop. Look for a red exclamation mark (on your map) to find the hideout. When you've found the red exclamation mark, you will see a ladder. Climb down it to enter the Phoenix Gang's hideout.

Inside the hideout, talk to Straven. If you ask to join, he will mention the Varrock Herald newspaper. This is a cover up. There should be an option to tell him that you know who he is, a member of the Phoenix Gang.

Straven will want you to kill Jonny the beard (combat level 2). He is located in Varrock's Blue Moon Inn. This bar is located near the south entrance of Varrock. Go inside the bar and find Jonny the Beard and kill him. Note that killing him with a ring of recoil won't make him drop anything.

Jonny will drop a report, which Straven needs. Grab the report and bring it back to Straven. Talk to Straven while having the report in your inventory, and he will make you a Phoenix Gang member, allowing you to enter their hideout. Straven will also give you the Weapon store key, which you need to save for your partner. The thieves walking around are not aggressive to any players, but will retaliate if you attack them.

Look around for a chest in the south-west corner of the hideout to find one half of the Shield of Arrav. You can only grab one shield at a time, and you can no longer obtain it after completing the quest.

Items required: food and a weapon (both optional but recommended).

Tell her you know about her gang and that you won't give your source. Ask her about what you should do to prove that you're trustworthy, and she will give you a task to join her gang.

Katrine wants you to steal from the Phoenix Gang. She wants two of their crossbows. However, you will need a partner in the Phoenix Gang for this part of the quest. Your partner must give you the Weapon store key they obtained when they joined the Phoenix Gang. Once you have the key, go toward the Phoenix Gang's hideout in the south-east corner of Varrock between the two pubs. Look for a small room directly south of the rune shop with a locked door and a ladder visible inside. When you've found it, use the key with the door and climb up the ladder.

You will have to kill the Weaponsmaster on this floor. If you try to pick up the crossbow without killing the Weaponsmaster first, he will prevent you from doing so. Once he is dead, take two Phoenix crossbows. When you have both of them, go back to Katrine, and she will make you a member of the Black Arm Gang. Go upstairs in the hideout and look for a cupboard, which contains one half of the Shield of Arrav.

Note: If you are worried about the battle, you can ask your partner to kill the Weaponsmaster himself and simply trade the Phoenix crossbows to you.

Items required: Shield of Arrav half 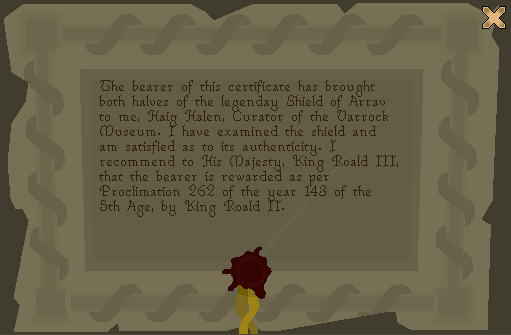 Take the certificate to King Roald in the castle to receive your reward. Quest complete. 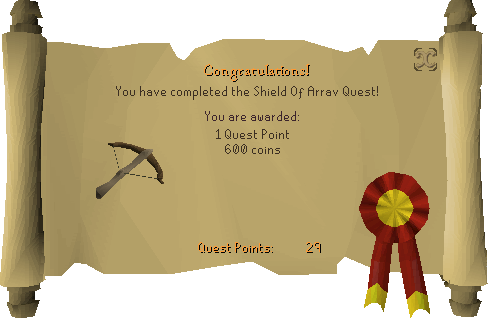