View source
watch 02:40
World of Warcraft: Dragonflight - The Loop
Do you like this video?
Play Sound
RSCRS
This article is about the city. For the quest, see Shilo Village. 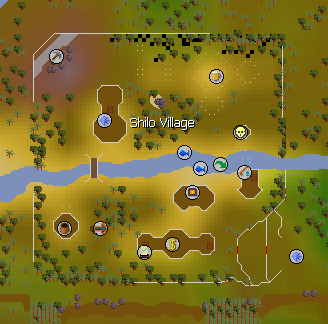 Shilo Village is a village on Karamja. It is only accessible to players that have completed the Shilo Village quest.

There are several excellent areas to train skills in Shilo Village:

In northern Shilo Village there are 7 gem rocks. If a player mines these rocks, they shall get a gem instead of an ore. Players mining gems here may obtain precious (Sapphire, Emerald, Ruby, and Diamond) or semiprecious (Opal, Jade and Red topaz) gems. Because a charged Amulet of glory increases the chance of obtaining gems while mining, wearing a charged Amulet of glory sharply increases the speed of mining gem rocks. Players earn 65 Mining experience per rock mined. This area is popular among many players because here they can train both Mining and Crafting (by cutting gems) at the same time.

The Shilo Village furnace is directly across from the bank, which makes it a popular furnace for players smelting large quantities of ores into bars. A disadvantage of this furnace is that the man at the door requires 20 coins for entry, although players can put coins into a coffer in order to keep a full inventory of ore. However, this furnace is the closest furnace to a bank in the game.

There are four fishing spots in Shilo Village. At these fishing spots, fly fishing rods and feathers can be used to lure trout and salmon, or fishing rods and fishing bait can be used to catch pike, slimy eel, and cave eel. Power fly fishing in Shilo Village is considered to be one of the faster ways to train Fishing. This method involves buying large amounts of feathers on the GE or from the eastern fishing store and then catching trout and salmon from the center river. This fish can either be dropped or stored in the southern bank, or the gem mine deposit chest. The raw fish can then be sold for a small profit on the GE.

The Undead ones over the gate can be maged or ranged safely, making it good for xp. Halberds can also be used to safely train melee.

There are four forms of transportation to Shilo Village: Vigroy's cart, the Lady of the Waves, fairy ring code CKR, and Karamja gloves 3.

The cart system provides a quick transport between Shilo Village and Brimhaven for 10-200 gp (dependant on the players held cash) once they have finished Shilo Village.

The fairy ring CKR, south of Tai Bwo Wannai, can be used to reach Shilo Village, but you will have to walk around the south and enter by the east gate.

Karamja gloves 3 provide a teleport to the underground part of the Shilo gem mine. This can also be used to reach Brimhaven by taking Vigroy's cart.

There are two shops in Shilo Village, the general store, and the fishing shop.