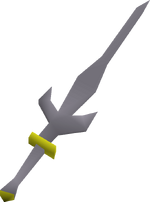 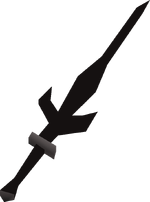 Silverlight is a demon-slaying sword that is very effective against demonic creatures. It is first obtained during the quest Demon Slayer, where it is used to defeat Delrith. During Shadow of the Storm, Silverlight is dyed black using black mushroom ink, and later becomes Darklight after it is stained with the blood of Agrith-Naar.

If it is lost, it can be bought back from Sir Prysin for 500gp at Varrock palace. It can also be sold to the Wise Old Man for 80gp. It is possible to obtain multiple Silverlight swords by dropping them and buying more, or by getting it mounted in a player-owned house at level 42 Construction.

As the name implies, it is made out of silver and therefore is effective against Vampyres.

Warning: Dying Silverlight black will consume all copies of the sword in your inventory, leaving you with only one dyed sword. You will need to bank or drop any extra swords before dying one.

Warning: After completion of Shadow of the Storm, Silverlight becomes unobtainable. Sir Prysin will instead sell Darklight for 1000 coins.