The White Knights' Castle in Falador 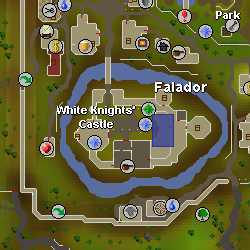 Sir Vyvin is a non-player character that is involved in The Knight's Sword quest, his being the sword that was lost. He lives in the White Knights' Castle in Falador in the eastern part of the 2nd3rd floor[?]. He gives white equipment to anyone who has completed Wanted!.

In order to increase your ranking, you must kill a certain number of Black Knights. You start off as a Novice at 100 kills, and as you kill more knights, you'll advance in rank.

Players can check their rank upon clicking the Wanted! Quest journal, with wordings of "I am currently a (Rank) White Knight."

Knight rankings can be used to obtain white equipment. Each piece of equipment requires a specific knight ranking to buy, but not to wear. Pieces of White equipment can be sold back to Sir Vyvin at the same price as they were bought at.