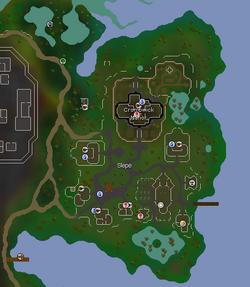 Slepe is a small coastal town which occupies an area east of Meiyerditch and can be reached by running south of Port Phasmatys. Alternatively, players may pay 10,000 coins to Andras north of the Ectofuntus to take players to the town.

The town is currently infected with the sleeper plague, which causes infected people to fall into a deep sleep.

The town's church is Zamorakian, and currently houses Nemishka and Lady Crombwick, who both are infected with the sleeper plague and are under the care of Sister Sevi and Sister Toen, respectively.

On the 2nd3rd floor[?], players can take a book named explosive discovery. A chest is also found here, but can only be opened with the old key, which cannot currently be obtained.

On the church's roof, several chaos druids and chaos druid warriors can be found.

The Rat & Bat is a small pub run by Carl. He only sells to players bloody bracers, which, according to Carl, are made with local ingredients.

Under the town is a dungeon, accessible by climbing down the ladder in the small house next to the church.

The Crombwick Manor is the residence of Lord Crombwick. As the entrances to the manor are locked, it is only accessible via the ladder in Kroy's laboratory in the Slepe Dungeon. It has been invaded by Damien Leucurte, vampyre juveniles and vyrewatch, and as a result appears messy.

The upper level of the Rat & Bat.
Add a photo to this gallery

Retrieved from "https://oldschoolrunescape.fandom.com/wiki/Slepe?oldid=8698061"
Community content is available under CC-BY-SA unless otherwise noted.