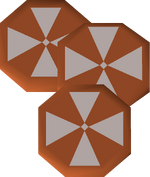 Sliced red banana used in preparing the snake for King Awowogei during Recipe for Disaster. After the quest is complete, there is no further use for red bananas, nor can any more of them be obtained.

Retrieved from "https://oldschoolrunescape.fandom.com/wiki/Sliced_red_banana?oldid=8691193"
Community content is available under CC-BY-SA unless otherwise noted.