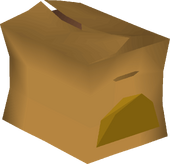 Soft clay pack is an item pack containing 100 Soft clay. It can be purchased from Prospector Percy in the Motherlode Mine for 10 Golden nuggets. Soft clay packs are non-tradeable.

Each soft clay is currently valued at: 213 making each pack worth 21,300 and each Golden nugget worth 2,130. This makes the soft clay pack the most profitable use of golden nuggets.

Retrieved from "https://oldschoolrunescape.fandom.com/wiki/Soft_clay_pack?oldid=8689497"
Community content is available under CC-BY-SA unless otherwise noted.