Varrock Southeast Mine, East Varrock Mine 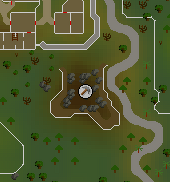 The south-east Varrock mine (also called East Varrock Mine) is a good low to medium level mine located outside the south-east corner of the city wall. The mine contains no resident monsters, which makes it suitable for newer players or players with a low Combat level, with iron and the raw materials for bronze. However, there is a level 6 Giant rat slightly to the north of the mine, which is aggressive to players level 12 Combat or lower.

It is also arguably one of the closest free-to-play mines in relation to a bank (along with the Dwarven Mine), making it popular for power-miners who wish to bank the iron ore that they obtain. The nearest bank is Varrock East Bank, which is accessed via going north by the city wall and taking the east entrance. Players walking to Varrock East Bank should make sure to walk to the bank with a full inventory, to conserve run energy, and then run on the way back. Although Varrock West Bank and the Grand Exchange are only slightly further, Varrock East Bank should be used, and the Varrock Teleport can be used for a faster trip if money isn't an issue. However, competition for iron ore here makes it hard for low levelled players to get iron ore.

Distributed throughout the mine there are:

There is a nearer mine with several more higher-levelled ores at the South-west Varrock mine.

Retrieved from "https://oldschoolrunescape.fandom.com/wiki/South-east_Varrock_mine?oldid=8211577"
Community content is available under CC-BY-SA unless otherwise noted.