Wilderness steel mine, Lum mine, Skeleton mine, North Edgeville mine, Mage of Zamorak mine

At the point where the River Lum enters a tunnel 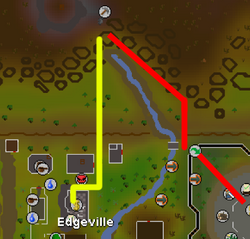 The south Wilderness mine is a small mine located in level 6 Wilderness, near the Air Obelisk hill. It is rarely used, if ever, although visited quite often for the Mage of Zamorak is stationed nearby the mine and can teleport players to the Abyss. It is, however, quite close to the banks at Edgeville and the Grand Exchange.

It contains three coal rocks and two iron rocks and so can be useful for Superheat Item smithers. The downside is the mine is filled with several aggressive level 22 and 25 Skeletons, which also patrol around the River Lum, meaning you will constantly be attacked when mining. The closest bank is at Edgeville, a short walk to the south. PKers can also attack you here, but because the level of the Wilderness is so low here, the skeletons are usually a greater threat than the PKers.