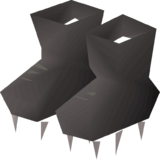 Spiked boots are boots that can be obtained by bringing Dunstan (the Burthorpe blacksmith), an iron bar and a pair of climbing boots. Dunstan will only help after a player completes a required portion of the Death Plateau quest.

These boots are used during Desert Treasure while trying to obtain the Ice diamond on the Ice Path segment. The spiked boots are unequipable, except during portions of Death Plateau and Desert Treasure. After the quest they may only be needed to complete a step in a master level Treasure Trails.