A ghastly weapon with evil origins combined with a holy light.
Loading... 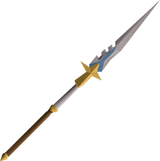 The staff of light is a one handed staff which requires 75 Attack and 75 Magic to wield. It is created by using Saradomin's light on a staff of the dead. This process is irreversible.

The staff of light inherits all of the staff of the dead's effects. The only differences between them is that the staff of light autocasts the Saradomin Strike god spell rather than the Flames of Zamorak god spell. In addition, it counts as both a Saradominist and a Zamorakian item while in the God Wars Dungeon and in the Desert Bandit Camp.

The staff of light cannot be upgraded with a magic fang to provide the additional magic attack bonus and toxic effect given to the toxic staff of the dead.

The staff has a special attack, Power of Light, which is the same special attack as the staff of the dead's Power of Death. It halves all Melee damage of your opponent(s) (all opponents that hit you in the time of the special attack) for one minute at a cost of 100% special attack energy. This effect stacks with the PvP damage reduction effect of the Protect from Melee prayer, but is lost if the staff is unequipped.