Fit for a Monkey King. 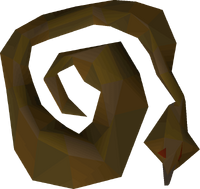 A stuffed snake is made during the Freeing King Awowogei subquest of Recipe for Disaster, and requires level 70 cooking to make. It is made from stuffing a snake corpse (obtained by killing a Big Snake) with a sliced red banana and Tchiki nut paste to obtain a raw stuffed snake and then cooked on the snake-shaped rock in dungeon below Temple of Marimbo. A Stuffed snake heals 20 hitpoints.

It is suggested to prepare at least three since cooking often fails. The cooked snake is given to King Awowogei to complete his portion of the quest.

When eaten a message in the chatbox will appear, stating You eat the stuffed snake—it's quite a meal! It tastes like chicken.

Retrieved from "https://oldschoolrunescape.fandom.com/wiki/Stuffed_snake?oldid=9049950"
Community content is available under CC-BY-SA unless otherwise noted.