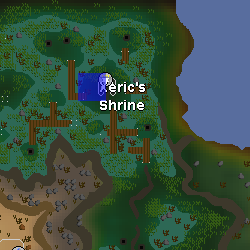 The Swamp Priest, formerly known as Captain Reynard Koli, is a lizardman priest that is found in the swamp altar in the Lizardman Settlement.

Around 30-40 years ago, he led a charge to defend the Shayziens' Wall from a lizardman attack. At the start of the battle, an arrow impaled his eye, knocking him out and resulting in him missing most of the battle. By the time he woke up, he found himself in lizardman territory and was worried for his life.

Contrary to his beliefs, the lizardmen treated him well. He hoped for his fellow Shayzien to rescue him when they did not find his body among the corpses, but they never came. When he regained his strength, the lizardmen let him leave, so he went back to the wall. Unfortunately, his time with the lizardmen had changed his appearance, so when he arrived at the wall, the Shayzien believed him to be a lizardman and fired on him.

He returned to the settlement and found a shrine, where he lives in to this day.

In addition, after using The fisher's flute on Kharedst's memoirs, it can be used on the Swamp Priest, which reveals that he knew Rose, the daughter of King Kharedst IV, the last king of Great Kourend.

If the player uses Kharedst's memoirs (with The fisher's flute included) on him: