Note: Do not start Swan Song if you wish to complete Recipe for Disaster (Sir Amik Varze) first. The Wise Old Man will not have a dialogue option about the Evil Chicken and only talk about the runes you have to bring him for Swan Song. When you give him the runes he will teleport away from Draynor Village. If you have started Swan Song you must complete up to "Repairing the Colony" before you can continue Recipe for Disaster (Sir Amik Varze).

Recommended: 50 coins or a ring of charos unless using fairy rings. A teleport to Draynor Village or close.

The easiest way to reach the Piscatoris Fishing Colony is to teleport using the Piscatoris teleport scroll. It can also be reached by boat, from the river west of the Tree Gnome Stronghold. To use the boat, you must either pay Kathy Corkat 50 coins, or charm her while wearing the Ring of Charos. After you have started the quest, you will not need to pay her again. You can also use the fairy ring code AKQ, and run north-east to the Colony.

Once you reach the Colony, walk a short distance north-east, and speak to Herman Caranos. When you agree to help him, the quest will start. He will ask you to find the Wise Old Man of Draynor Village and secure his services. Agree to this, and travel to Draynor Village.

Talk to the Wise Old Man. After some conversation, he will tell you that he requires 10 lava runes, 10 mist runes and 5 blood runes before he will help you. Give him these runes, and return to the Fishing Colony.

Battle at the Colony

Items required: Combat equipment to fight 8 level 79 Sea trolls with no Ranged/Magic safespots. Use of Protect from Melee is recommended. Sea Trolls attack with Melee style.

Recommended: A teleport to Yanille, 5 iron bars, logs, and a tinderbox. Fishing level boosting item if you're below 62.

Warning: Dying during this fight will make you lose all items dropped upon death.

Travel back to the Piscatoris Fishing Colony. The Wise Old Man will be waiting in place of Herman Caranos. Talk to him to enter the main Colony grounds, where you will be attacked by eight (8) level 79 Sea trolls. The Wise Old Man will help you by casting Saradomin Strike on the trolls (he hits super high, sometimes over 40); however, after 10 casts, he runs out of runes and resorts to throwing stones at the trolls, with a maximum hit of 2. Note that you can "use" blood, air, and fire runes on The Wise Old Man during the fight to give him more runes. However, he will only take one rune each time you use them on him, making this not recommended as the trolls will continue to attack you.

Once you have killed the trolls, enter the gates of the Colony. The Wise Old Man will tell you to find Herman Caranos, after which he will disappear. Herman is in the building at the eastern end of the Colony.

Optional: You can search Herman's desk for a book, which tells you about the Wise Old Man's past. If you have a house with a bookcase in it, this book will become available.

When you talk to Herman, the Wise Old Man will reappear. You will then be told to do some odd jobs around the colony.

The following two tasks can be done in any order:

Arnold Lydspor can be located in the bank to the west of Herman Caranos, at the bank sign on the minimap.

Note: Arnold's bank and general store cannot be accessed until the quest is complete.

He will tell you that the Fishing Colony has no food and that he needs five cooked fresh monkfish. He will give you a small fishing net with which to catch fresh monkfish. The fishing spot for them is located to the north-west. If you are using a boost from level 57 (Admiral pies), then you will need at least four pies because when a troll spawns, you cannot continue fishing, and therefore, your level may drop.

While fishing, you will be attacked by three Sea Trolls whose levels get progressively higher - levels 65, 87 and 101. You must kill these in order to continue fishing. When you have caught the fresh monkfish, you can cook it on a range to the south. You may burn the fish. When you have five cooked fresh monkfish, take them to Arnold.

Franklin Caranos is near the entrance gate of the Colony. He will ask you to make five iron sheets to repair the west walls. He will give you a tinderbox to heat the metal press. If you have the iron bars and logs, you can skip the following steps:

Pick up a pickaxe and an axe from the pile east of Franklin. Exit the Colony via the gate, and head back underneath the hole. To the south, you should find several rocks; mine enough iron ores to make five iron bars (you will be able to smith them with the usual 50% success rate at the Colony), and cut down a dead tree for some logs. Return to the Colony and smith your ores into bars, returning to the rocks and mining more ores if required, until you have five bars.

Go into the building with the furnace, and use your logs with the firebox and light them. Then, use your iron bars with the press to make iron sheets. Tell Franklin that you have the sheets, and he will give you a hammer, with which you can repair the walls to the west. Once you have done this, talk to Franklin again.

Important: Keep the pickaxe since you'll need it to mine clay in the next part if you didn't bring any.

Items required: A pickaxe (to mine the clay, needed only if you didn't bring any).

Recommended: 7 bones, a pot and a pot lid. (If making a pot lid, bring a pickaxe.)

Next, go back to the Wise Old Man and Herman Caranos, who tell you that they need an army to fight and defeat the Sea trolls once and for all. The Wise Old Man tells you to visit Wizard Frumscone, in the basement of the Wizards' Guild.

Note: This is where you need to boost your Magic level if it is lower than 66.

You may find it advisable to pick up a pickaxe, if you have not done so already, before you leave for Yanille. You can use any recommended methods as mentioned to travel to Yanille.

At Yanille, you may get seven normal bones, pot and pot lid from the bank if you have them. Head into the Wizard's Guild and go down the ladder. Wizard Frumscone will appear and refuse to help you, but he does tell you of one who may - Malignius Mortifer.

Important: Be sure to bank any god-related items prior to talking to Malignius, or he will refuse to help you (Bandos chestplate/tassets, Guthix-armour or the ancient mace are fine).

After making the pottery, however, you may wear your items.

You can use your charged amulet of glory if you have them to teleport to Draynor Village, and head west to find Malignius, who is accompanied by elemental wizards, slightly north-west of the Port Sarim magic shop.

Alternatively, you can use the southern portal at the top of the Guild to take you to the Dark Wizards' Tower. The dark wizards drop bones, so you can kill seven of them for seven bones if you still need them. Walk south, through the gate, and then south-east from here to find Malignius.

Malignius will tell you that he needs seven normal bones. You can kill highwaymen or the chickens in the farm nearby for these. (You cannot kill the surrounding wizards, as they drop ashes.) When you give them to him, he will tell you that you also need some way of storing the seeds he will give you, and that you should ask in the Crafting Guild to the west. He will give you a brown apron, which will allow you access.

Ask the master craftsmen (the one with dreadlocks and no skillcape) about how to store the seeds until you find the one that will tell you; you will need simply a pot with a pot lid. You may skip the rest of this paragraph if you have both items. Mine two pieces of clay in the Guild mine; use the jug in the northern end of the Guild filled with water from the sink to the south to soften the clay, and then shape them on the potter's wheel. Fire them in the pottery oven.

Warning: Now, you may wish to restock your combat supplies for the upcoming fight at a bank as Malignius will, without any warning, teleport you to the Piscatoris Fishing Colony after you have finished talking with him.

Now, return to Malignius with your pot and pot lid, and he will teleport you to the Fishing Colony.

Items required: Combat equipment to defeat a level 170 Sea Troll Queen, which is able to use Magic, Melee and can drain Prayer. Ranged/Magic safespots are available but not advisable.

Warning: Dying to the Sea Troll Queen will make you lose all items dropped upon death.

After entering the Colony and talking to Herman Caranos, you will be shown a cutscene of your army of Skeleton Mages defeating the Sea trolls and then the Wise Old Man killing the levelless Sea Troll General. However, while he is celebrating, he gets hit for 254 damage (which doesn't make the slightest dent on his health bar). He will be disabled for the rest of the fight, so you must take on the Sea Troll Queen yourself.

The Sea Trolls rise from the ocean depths. 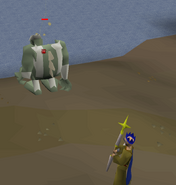 The Wise Old Man is badly hurt by a powerful water spell.

You must fight the Sea Troll Queen!

The Queen cannot move from her location, so anywhere not directly next to her is suitable for long-ranged attacks. The Queen uses the Magic attack Water Wave and a basic Melee attack where possible. If you are using overhead protection prayers and are not within melee range, the queen will use a Prayer-draining attack. This means that long-ranged attacks are inadvisable unless you are confident in your armour to protect you from powerful magical spells (e.g. Armadyl armour). Meleeing the queen means she will not use her prayer draining attack; however, she uses both Melee and Magic attacks. She is much more damaging with magical attacks, so it is best to use Protect from Magic and wear melee armour. She is not too hard for a skilled fighter, though she should not be taken for a pushover either.

After defeating the queen, talk to Herman to finish the quest. 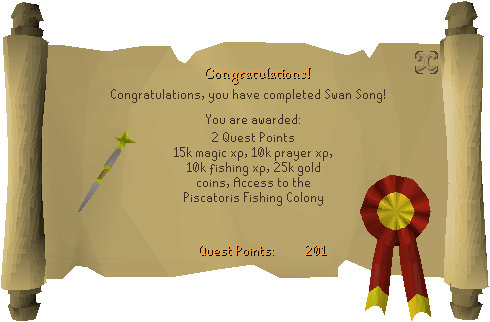