Items required: A knife, Karamjan rum, and a banana.

Begin the quest by visiting the Musa Point pub (teleport to Karamja via Glory) and buying Karamjan rum. Then, go to the banana plantation and pick a banana, if you don't have one already. Use your knife on it to obtain a sliced banana. The rum, combined with a sliced banana, will be necessary in a later part of the quest. (However, make sure you combine it now before teleporting, or the Karamjan rum will break)

After obtaining the Karamjan rum, travel south to Tai Bwo Wannai and talk with Timfraku upstairs in the north-west house with a quest icon above it. Talk with him until he asks you to gather his sons, Tamayu, Tiadeche, and Tinsay, in the village.

In order to avoid accidentally banking/losing the Karamjan rum (sliced banana), visit Tinsay at Cairn Isle and give it to him. (This will fulfil the first of three requests he makes later on)

Items required: A steel spear or better, a small fishing net, a pestle and mortar or 6 gold, and one 4-dose or two 3-dose agility potions.

Optional: Logs, a tinderbox, and a raw karambwan (one is obtainable later in the quest)

You can find Tamayu southeast of the village at the mine. He will return to Tai Bwo Wannai only once he has killed the Shaikahan. Talk to him; ask him when he will succeed and offer to join him on his next hunt. During a cutscene Tamayu will fail to defeat the Shaikahan. He will claim that he is overpowered by its strength, regenerating health, and agility.

Do not give your spear or agility potion to Tamayu yet. Go to the pond southwest of Tamayu and net-fish for karambwanji. You must poison the spear with karambwan before giving it to Tamayu.

Fish for at least 22 raw karambwanji. These are stackable in 1 inventory slot. (It's recommended to have a few spares or keep the net for later if your Cooking level is low.)

Now travel north. If you don't have a pestle and mortar, you can buy one at Jiminua's Jungle Store (general store icon) north-west of the village. Then continue and and talk to Lubufu (near the POH portal) by the fishing icon on the southern shore of Brimhaven. Select to "Talk about him..." and ask him how old he is. Then offer to help him collect bait, and then say that he sounds like he could do with the help. He will then tell you to catch 20 karambwanji (stackable). If you banked earlier, hand over the necessary amount or else you may need to return to the pond. Next, ask him what he uses to catch karambwan, followed by what he does with them, and he will ask you if you want to become his apprentice. He will then give you a karambwan vessel and the information that it must be filled with karambwanji as bait. You will need three vessels total so use the drop trick to obtain two more from him. Use a karambwanji on one of these vessels.

Items required: A karambwan vessel, and a raw karambwanji. Logs and Tinderbox

Next, go to the northeast corner of the jungle (fairy ring DKP). Tiadeche can be found close to the ring, near the coast. Find Tiadeche, and talk to him. He says he will go back to Tai Bwo Wannai after you teach him how to catch karambwan. Give him your full karambwan vessel and he will subsequently give you a raw karambwan. He will also ask you to visit his brother Tinsay for another matter. Grab the seaweed that spawns here on the beach as you will need it later on.

Once you have the raw karambwan, cook it to obtain a poison karambwan. If Ironmen are not successful in their attempt, they will need 65 Fishing to catch another. Use the pestle and mortar on the karambwan to produce karambwan paste. Then, use the paste on the spear to create a karambwan poisoned spear. If you eat the karambwan you will be poisoned and can easily die, so right-click on it and select the "use" option, or simply use the pestle and mortar on it to prevent eating it.

Now, head back to Tamayu by running south, crossing the agility shortcut, then running west to the mine. If you didn't purchase the Jogre bones, kill a Jogre on the way and pick up the bones.

Once you have returned to Tamayu, hand him the newly poisoned spear and agility potion and ask to join him on his next hunt. He will now be successful and promise to return to the village once you've talked with his brothers and father.

To save some time helping Tinsay, kill a nearby monkey (with Ranged or Magic) and use its corpse on Tamayu. He will ask you if you'd like to skin it, returning the monkey bones and skin. This can only be done after you have helped him defeat the Shaikahan (you only need to save the skin).

Talk to Tinsay on Cairn Isle, southwest from Tamayu. He is located up the rockslide and across the bridge. He'll tell you that he's trying to repair the tribal statue in the village. He has lost his sanity recently due to some sort of accident with a jogre. He asks for three special local items.

Banana rum (if not done beforehand)

Items required: A banana, Karamjan rum, and a knife.

Do not use a whole banana on the rum without slicing it. It will create a joke item, a banana stuffed into the top of the bottle. After you add the banana slices to the Karamjan rum it will not break while teleporting.

The first thing he'll ask you to get him is a bottle of banana-flavoured rum. Head to Musa Point, and buy a bottle of Karamjan rum from the liquor store there. Then, go into the general store, take the banana and knife off the table and use the knife with the banana to slice it. Add these slices to the rum and give it to Tinsay (be careful not to eat the slices!).

Items required: Seaweed, a monkey corpse, and a Ranged or Magic method to kill a monkey.

Like before, do not use a monkey corpse on the seaweed before taking the monkey to Tamayu for skinning. This will create another joke item, and you will need to obtain another monkey corpse and more seaweed.

Next he wants you to bring him a seaweed sandwich made with monkey skin. If you forgot seaweed get some from the shore south of Cairn Isle. Use the monkey skin you got earlier with the seaweed to make a sandwich. Give it to Tinsay.

Items required: Jogre bones, a raw karambwanji, a pestle and mortar, logs, and a tinderbox.

You now need to get some burnt jogre bones marinated in karambwanji sauce. Be careful not to bury the bones! Use the bones on a tinderbox to burn them. If your Firemaking level is below 30 you will not be able to burn the jogre bones with a tinderbox. Instead, you will have to burn them in the nearest furnace. (or Superheat Item works)

Next, catch another raw karambwanji, and grind it with your pestle and mortar. Then, add the paste to the burnt bones to get pasty jogre bones. Don't left click. Cook the pasty jogre bones on a range or fire to marinate them. Give these to Tinsay.

Now that you've helped Tinsay, he will regain his sanity and agree to return to Tai Bwo Wannai.

After you're done with all three brothers, talk to the Timfraku again for your reward. Then, talk to each of the three brothers in their local shops for an additional reward! 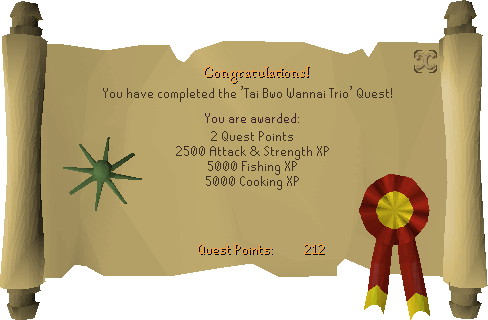