If you have completed The Lost Tribe quest, you may skip to Option B! If not, use Option A. Partial completion is possible, you must only reach the point at which it is possible to obtain the Brooch.

To start, you need to find Juna deep inside the caves under the Lumbridge Swamp. A bullseye lantern is recommended to get deep enough safely, as a bullseye lantern will not be extinguished, will not explode from swamp gas, and cannot break. You don't have to make it yourself, as a player with high enough Smithing and Crafting can put one together for you, but you must be able to light it yourself. Before you enter the caves, use a cut sapphire on the bullseye lantern to get a sapphire lantern. If you do not do this now, you will not be able to swap in the caves, as an update does not allow you to extinguish your lantern. This sapphire lantern will also light the caves. If you go to Juna's cave through the normal route, as you pass by holes in the wall, stop one square away from them; then, run past them. You will not be grabbed by the wall beasts if you use this method.

You can enter the cave from the swamp, travelling south, then hugging the south wall all the way until there's a place where you can jump on a rock to cross a small, subterranean river. On the way, you will pass by a room where swamp gas will blow up any open flames you are carrying on you if you take too long to go past, each one hitting 10-15 damage. Watch for a grey 'X' marked on the northern side of a wall, this is the room. South of the frogs is a cave entrance. From there, head east, climb down the slope, and continue east until you see Juna sitting in front of the cave. Talk to her to begin the quest.

Skip to the the Juna paragraph to continue.

As mentioned above, it's a good idea to have a lit sapphire bullseye lantern made. Since you have at least started The Lost Tribe quest, you won't need the spiny helmet, you can just go to the basement of Lumbridge Castle, climb through the hole in the wall, head south, and then climb through the hole to get into the cave (right-click use on your pickaxe on the second hole to clear the pathway). From there, head straight south to the frogs and then jump across the stepping stone at the southern river, and enter another the tunnel at south. From there, head east, climb down the slope, and continue east until you see Juna sitting in front of the cave. Talk to her to begin the quest.

When you talk to Juna, she will tell you some stories about the Tears and tell you of how very bored she has become. She's willing to let you into the cave for a little while to gather some of the miraculous Tears of Guthix, but first, she has a task for you. To collect the tears, you will need a stone bowl. Getting there will be a bit tricky, though, since you can't quite climb up to where the rocks you need are.

You cannot climb up the rocks to the south, so instead, head north of Juna up the path, and climb the rocks. In the big black middle area are a group of floating orbs of light called light creatures.

Use your lit sapphire lantern on one of the blue floating creatures. The creature will pick you up and give you a ride to the south side where the rocks are.

Use your pickaxe to get a magic stone, and then use your chisel to craft it into a bowl. One will be enough. Now, head east to climb back down and then go back to Juna. Give this bowl to her, and your quest is complete.

You can now reacquire the sapphire used when making your sapphire lantern by using the lantern with your lantern lens. 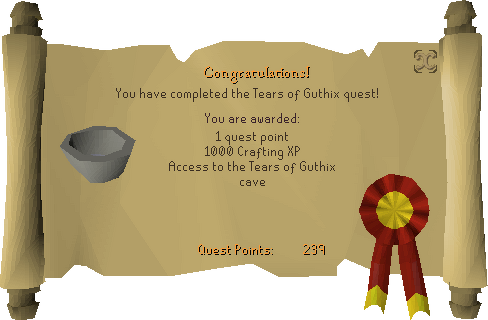