• Monkey Madness I
• Recipe for Disaster 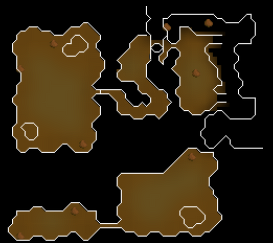 A small crevice in the middle of the first area leads to a small cave with a long, hot rock on which players may cook stuffed snakes for the Awowogei portion of Recipe for Disaster. However, a line of hot rocks blocks the players' way, and would burn their feet for rapid 10 hitpoints. Players must hold a zombie monkey greegree to pass this.

West of the first area is a small tunnel filled with traps and a few more monkey zombies, which leads to a wooden door that cannot be opened or even examined. Beyond the door is a large cave crawling with monkey zombies, as well as a inaccessible monkey skull that can only be obtained after completing the hard Western Provinces Diary.

Retrieved from "https://oldschoolrunescape.fandom.com/wiki/Temple_of_Marimbo_Dungeon?oldid=8691719"
Community content is available under CC-BY-SA unless otherwise noted.