Note: If you start the quest, you will not be able to use

Peer the Seer to bank your items, unless the player completes the easy

Fremennik Achievement Diary, which re-enables his

Begin the quest by speaking to

Brundt the Chieftain. He explains that the only way to become a

Fremennik is if you impress seven of the twelve members of the council of elders enough that they give you their vote.

Each of the seven that consider accepting you have a personal task for you to complete. The other five council members' votes are unattainable.

You can do the trials in any order. 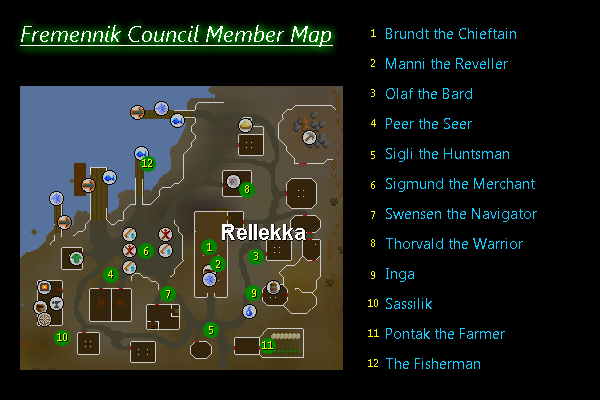 Manni in the bar right next to

the chieftain. He can be found walking around drinking. Talk to him and challenge him to see who can drink more beer before getting drunk. Take the

keg of beer and

beer tankard, which can be grabbed off the bar in the longhall.

Talk to him again to drink. You will lose no matter what, while he'll hardly get drunk at all. Go back to

Seers' Village, and buy a

low-alcoholic keg of beer from a

Poison Salesman by the bar for 250

Beer here to save time getting the

Council workman, by using it on him, at the end of the bridge to

Rellekka to get a cherrybomb (you can get it while walking back from the poison salesman).

Go to the Rellekka bar and look on the outside of the longhall for a pipe. It should be on the east wall - the same side with

Olaf the Bard. Light the cherrybomb with your

tinderbox; then, hide it in the pipe. Walk into the hall, grab another keg of beer, and use the low-alcoholic keg of beer on the normal keg of beer. The cherrybomb will then explode, distracting the Fremennik and allowing you to switch the contents.

Talk to Manni again once you have switched the contents. After drinking the keg of beer, Manni will give you his vote after noticing that you drunk a whole keg of beer without any side effects.

Olaf east of the bar building where you started the quest. He'll give you his vote if you can prove your worth as a bard by performing at the longhall. The first thing you need is a lyre.

There are two ways to get a

Then you will then need to string the unfinished lyre, but unfortunately only golden wool will work. Head southeast of the tree until you find several golden sheep and a golden tree. Near them will be a troll called

Lalli, who will initially think you want the apples when you want the wool. He will tell you that he already gave it to another human, so go find him.

Note: You MUST start the trial by speaking with Olaf the Bard BEFORE speaking with Lalli or else he will not tell you about the other human.

The other human is

Askeladden, who is located outside the long hall in Rellekka. Talk to him and he will give you a

pet rock which he fooled Lalli with. Return to Lalli with the rock, but he will refuse it because the rocks might have baby rocks, so tell him that you can make a delicious rock soup with it.

Use the potato, cabbage, onion, and rock on Lalli's stew, which is just outside Lalli's cave home. Ask Lalli to taste it; he will like it and give you some golden fleece. The fleece will need to be strung into a ball of wool; even though there is a spinning wheel in Rellekka, you cannot use that until the quest is finished, so you will need to go to Seer's Village instead. Use the ball of wool on the unfinished lyre, which will require 25 Fletching.

Once you've obtained the lyre, you need to get it enchanted. Bring a

sea turtle with you (if you have more than one lyre to enchant, then bring one fish for each lyre you wish to have enchanted; if using raw sharks, try to get raw sharks from Rufus' Meat Emporium in Canifis over a period of time). Southwest of Rellekka is a strange altar. With the lyre in your inventory, use your raw shark/manta ray/sea turtle on the strange altar. A spirit named Fossegrimen will appear and enchant your lyre for you.

Go back, and talk to Olaf the Bard again. Then, enter the door the Longhall Bouncer is guarding to go onstage. Play your lyre in front of the crowd, then talk to Olaf a final time to get his vote.

Items needed: None but recommended to bring some food, armour, a weapon (a Halberd is best, ranged is not effective), and prayer potions.

Sigli can be found near the entrance gate. Your task is to find the

Draugen, an immortal spirit, and defeat it to weaken it. Keep using the

hunters' talisman that he gives you to find where to go. The talisman is used the same way you might use a

talisman; selecting locate gives a chat message in the direction to go. The Draugen moves around the

Fremennik Province and can cross bridges. There is a small, transparent looking butterfly that follows the Draugen. It can be used to help located him. Level 48

Agility can help by allowing you access to the shortcut log bridge, as the Draugen has a random location that changes frequently. It should be noted, that if a player wants to find the

Draugen easily and fast, the player can sit near the bridge to the east of the strange altar and camp in a spot. Eventually, the Draugen will appear, announced by a chat message, "The Draugen is here! Beware!" With the proper

gear, a level-50 player should defeat him without problems. However, it should be noted that the Draugen is particularly resistant to ranged attacks. When you defeat him, the Draugen's essence will be absorbed into the hunters' talisman. Return with the talisman to

Sigli to get his vote.

Sigmund in the market. He will want you to get him an

exotic flower. This may sound easy, but you will end up having to get something or do something for another person, kind of like a miniature

One Small Favour quest. Refer to

the map above to easily locate the

The trick is to spell his name. First, go in the South portal, then the West, then East, then North, then South, then East, and finally North again (SWENSEN). After you finish, talk to Swensen to get his vote.

Items needed: None, but highly recommended to have some food, prayer potions, a god book, Rings of recoil, and Phoenix necklaces (if you have low Combat stats).

Thorvald lives in the helmet store. His task is for you to fight a special warrior called

Koschei the deathless. There are two rules:

It is possible to glitch the fight if you die, and you come back quick enough it is possible to keep fighting him from the point at which you died, and ignore the second Thorvald that pops up.

Stock up on the food and potions, then proceed to head down to Thorvald's basement. Note that if you have completed the

Lost City quest, you can smuggle a

dramen staff into the arena by taking a

dramen branch, and a

knife into the arena with you. When you enter the arena, Koschei is hidden. Simply roam around for a short while, and he will appear.

Koschei's first form is easy and should give you no problems. After you defeat him, he will regain all of his health and become stronger. There is no way to safe-spot him as you have no weapons, but you can trap him over the hole and wait a while for your health to regenerate. However, if you stay there too long, he'll disappear and reappear after you run around, back in his first form. His level is not displayed.

His second form might give you a bit of trouble, and you might need to use food or Prayer.

Pures can't really beat this form unless they are

His third form is fairly difficult, so you'll most likely need to use food and/or Prayer here. You may need a

prayer potion here as it is possible to run out of prayer points early. This is the last form required for you to defeat to complete the quest.

Warning: DO NOT LEAVE AFTER THE 3RD FIGHT. EITHER WIN THE 4TH FIGHT OR LET HIM WIN! (Leaving the arena during the 4th fight will result in your progress being reset, but his fourth form may roam the area when you return).

Note: If wearing a

Ring of Life, it is now safe to remove as you cannot die fighting his fourth form, you will be left at 1 hitpoint instead.

The fourth form is the hardest. He will hit about once every quarter second, but he usually hits one. It is recommended that the player use a

Ring of recoil, but be sure to bring enough rings for the fight (7 minimum) as the ring breaks after 40 hitpoints of damage, and Koschei has 255 HP in this form. In this form, Koschei will quickly drop your prayer points in intervals of 1-2 every second and will drop all of your prayer points as soon as the form starts.

Koschei will also attack extremely quickly, but will only have a max hit of 1. If you manage to beat Koschei in this form, you will be given a

Fremennik blade (which you can find elsewhere). Otherwise, when Koschei leaves you at 1 hitpoint, you will kneel on the ground and find yourself upstairs. Regardless, Thorvald will give you his vote for your bravery in fighting a superior foe.

Peer is found south of the market. He'll give you his vote if you can simply enter the front door to his house, and then come out the other side. This is more difficult than it seems because you cannot take any items in, and you will encounter many puzzles inside. You can deposit all your items by completing the dialogue after Peer introduces his trial.

Note: Because Peer will bank all of your items in your inventory, he should be done last to save a lot of time walking to and from the bank.

To get in, you need to answer a puzzle. The answer is a four-letter word, and Peer will give you a clue for each letter and the word itself. All possible answers include: time, life, mage, fire, wind, mind, and tree.

After you've solved the riddle, go upstairs. Search and study everything until you find an

empty jug, and an

You now need to get the

vase, which can be found in the chest upstairs in his house. To open it, you must set exactly four litres of water on it. You need the jug and bucket to do this. Here is what you should do:

Once you have all seven council members votes, head back to

Chieftain Brundt, and speak to him to complete the quest. 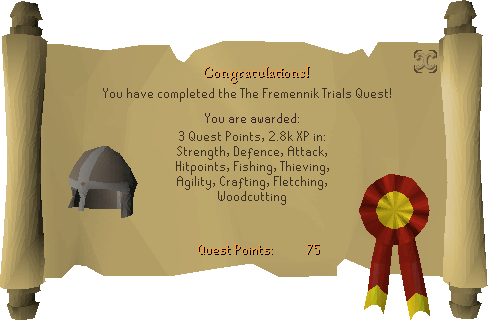