Old School RuneScape Wiki
Register
Don't have an account?
Sign In
Advertisement
in: Intermediate quests, Quests, The Hand in the Sand

The Hand in the Sand

The Hand in the Sand

Start the quest by talking to Bert in Yanille (in the building just east of the housing portal) and you will receive a sandy hand. He's afraid it will cause him some kind of trouble, and wants you to investigate it. He'll tell you to go talk to the captain of the guards. He hangs around the inn in Yanille.

Take the hand and a beer to the captain of the guards in the Ye Olde Dragon Inn. Give him the beer. He will ramble on, and then, he'll take a look at the hand and simply drop it in his beer, turning it into a beer soaked hand.

Go to the Wizards' Guild, just east of the bar, enter if you meet the requirements (66 Magic), or ring the bell at the eastern entrance to make Zavistic Rarve come out. Talk to him and explain the situation. He will tell you that this is the hand of one of his wizards, Clarence. He'll ask you to see if Bert's working schedule has changed recently.

Return to Bert's home, and talk to him again. He'll tell you that he works for Sandy Sand Co, which is based in Brimhaven. He'll give you a copy of his schedule and tell you that it hasn't changed recently, or so he thinks. Now, you need to head to Sandy in Brimhaven. You can go to Ardougne (If you have Fairy Rings unlocked you can use code b-l-r to get to the Legends' Guild and head SouthWest to Ardougne.) and pay 30 coins to get to Brimhaven. Sandy is located in the office just north-west of the Dead Man's Chest bar.

In Brimhaven, you'll see Sandy in his office. You can talk to him first if you want, but this isn't necessary. Search his desk in the house to get Bert's old schedule. Read it and compare it to the other schedule to see that Bert has indeed been working longer hours. While you're here, pickpocket Sandy to find some sand in his pocket — this may take multiple attempts. Keep it; it will become important later on in the quest.

Now, you need to visit Bert once more. Talk to Bert in Yanille to find a magic scroll that appeared in his house recently. It appears normal, but do not throw it out.

Take the scroll to Zavistic Rarve at the Wizards Guild to learn that it's a mind-altering scroll, and it was a trick to change Bert's hours without having to pay him more money. Now that you know that Sandy is behind it, you need to first get Betty in Port Sarim to make you a truth serum, and then record Sandy using the magical orb he gave you.

Take two vials, the redberries, the white berries, and a lantern lens, as well as the sand pickpocketed from Sandy's pocket with you to Zavistic Rarve. With your second vial, he will teleport you to Betty's shop after selecting the chat option "Can you help me more?".

Speak to Betty about the quest, and she will take the vial and give you a bottled water. You need to add redberries to make redberry juice, then add white berries to make pink dye. Once you've made some, use it on your lantern lens to create a rose tinted lens.

Talk to Betty again. Then, stand in the doorway while the door is open, and shine your lens at the counter (click on it in your inventory, then use it on the counter) to fill up a vial with truth serum. You now need a personal item from Sandy to fill up the vial. Talk to Betty again to use the sand you previously found in Sandy's pocket. Give it to Betty to finish the serum.

Back in Brimhaven, talk to Sandy. Get him distracted (try all the options, as there is no guaranteed one that will work). Once he looks out the window, use the serum on his coffee. Then, activate your Magical orb and talk to him. He'll confess that he bribed a wizard to put a mind-altering spell on Bert. He then changed Bert's schedule so that he'd work longer for the same pay. Afterwards, Sandy killed the wizard so that he wouldn't have to pay him; then, he buried parts of him in all of the sandboxes around RuneScape.

If you have not already filled up your bucket with sand, stop by Bert's sand pit and fill it up before you talk to Zavistic. Back in Yanille, talk to Zavistic Rarve with the Magical orb in your inventory - it is proof of Sandy's confession. Give him five earth runes and a bucket of sand. He will then cast a spell on Bert's sandbox so that it'll fill itself to compensate Bert for his troubles. Then, go to Entrana (there is a bank deposite box at Port Sarim to deposit all armour and weapons before going to Entrana). Talk to Mazion by the sandpit to get the dead wizard's head. Give this to Zavistic Rarve. He'll confirm that it belongs to Clarence, and gives you a reward for your help. 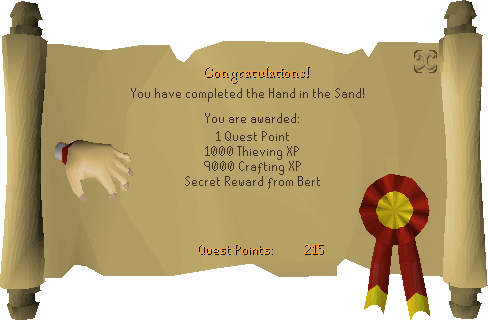 Completion of The Hand in the Sand is required for the following: