Go to Varrock Palace, and go to the far north room on the ground floor of the palace to find Reldo. Ask Reldo about Imcando dwarves. He will tell you that one is located south of Port Sarim. If you haven't already made or bought a redberry pie, do it now. Members can buy one from Romily Weaklax in the Cooks' Guild just west of Varrock (entry requires level 32 in Cooking and a chef's hat). When you have one, continue to Port Sarim and then head south.

The first one is to kill Dwarves, head to either the ground floor or beneath the Dwarven Mines to find groups between combat level 10 & 14, which have an uncommon chance of dropping one iron bar.

Get back to Thurgo with your blurite ores and your iron bars. He will make you a sword. If you want a sword for yourself, drop the sword Thurgo just made and talk to him again with the materials. He will make a second sword. Then, pick up the sword you dropped. You now have two swords. 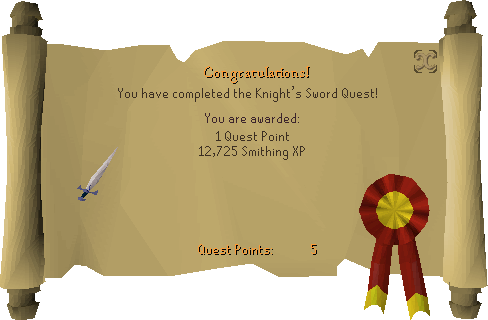