This article is about the miniquest. For the Arena itself, see Mage Arena. 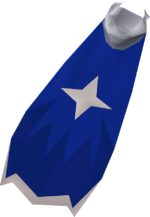 Head to the broken down house north-west of the Mage Arena in level 55 Wilderness. Use a knife or slash weapon to cut down the two webs in the house. Once the webs have been cut, pull the lever on the wall to be teleported into a small cave. The cave is a safe zone; you cannot be attacked by other players inside here.

Speak to Kolodion about additional challenges. He will tell you that he has been working on a spell that will increase the powers given by your god cape, but the components he requires are difficult for him to obtain. As the spell imbues the power of the three gods Saradomin, Zamorak, and Guthix, he requires the components of three powerful opponents who are each aligned to a god. You will then receive the enchanted symbol. This acts similar to the enchanted key and strange device.

Before tracking down the followers, it is highly recommended to set the Player 'Attack' option to "Always right-click" or "Hidden" in the Controls panel in the Options interface, so you do not accidentally become skulled.

After you have received the enchanted symbol, you can look for the three god followers located within the deep Wilderness, around Lava Dragon Isle. Most if not all areas will be in multi-combat zones, so stay cautious! Each use of the symbol can deal up to 16 damage, and can kill the player.

The symbol functions similarly to the Hot & Cold from Master treasure trails; as the player gets closer to where the follower is residing, the symbol will glow hotter, and the further you are, the colder it gets.

When the symbol states that it is visibly shaking, the follower will appear and attack you. Since you may run out of food most of the time searching for the followers, try to pinpoint their exact location before returning to a bank to restock on food.

The follower's spawn locations are random, and will change occasionally; you will be notified of this when you use the enchanted symbol after the spawn change.

If a follower has already spawned in the location where yours is supposed to spawn, you must either hop worlds or wait for it to despawn and use the enchanted symbol again.

The followers are very powerful monsters, being able to hit up to 43 if not using Protect from Magic, and can cast Ice Barrage and Tele Block. It is possible to dodge the Ice Barrage attack by stepping off the square you were standing on when the spell was cast. Unlike other players' Tele Block, this only lasts for a minute if Protect from Magic is used, rather than two and a half minutes.

In addition, the followers can only be harmed by their respective god spells, so you must use all three god staves for each of the three followers. Alternatively, using the staff of the dead (or its toxic variant), the staff of light or the Void knight mace to autocast Flames of Zamorak, Saradomin Strike and Claws of Guthix, respectively, is recommended, as their magic attack bonuses are higher, in addition to making the fight slightly easier by allowing the player to autocast god spells.

Each follower also has their own unique ability, making the fight slightly more challenging:

A player fighting Porazdir, one of Zamorak’s most trusted generals.

A player fighting Zachariah, one of the last remaining justiciars of Saradomin.

A player fighting Derwen, an ancient servant of Guthix.
Add a photo to this gallery

Your inventory should consist of:

Even with Protect from Magic, they will still hit hard and accurately, up to 20+. Thus, it is recommended to wear a mystic robe top and bottom, along with easily replaceable items, such as the Culinaromancer's gloves, the book of darkness, and a god cape (note that the cape's god alignment must be the same as the god spell you're casting). If you have at least level 80 Magic, bring additional runes for Charge, as it will increase the max hit of your god spells from 20 to 30.

If players are assigned a black demon for their Slayer assignment, wearing a slayer helmet (i) is recommended when fighting Porazdir, as the player's attacks would be more accurate.

Because of the high damage dealt by them, taking at least two rings of recoil gives 80 free damage over the course of the fight, which can be very helpful.

If the followers are not slain quick enough, they will despawn, and you will have to track it again and restart the fight.

The seemingly best way to beat each God Follower is to actually wear black d'hide body and legs, and a cheap magic attack boosting helm, boots, and gloves, which can be achieved with splitbark armour. Overall you should want a positive magic attack bonus of around +5-20. The reason for this is the Followers themselves have a -60 magic defense, and strangely that allows you to still hit them, while they might splash on you. Being in the wilderness this allows for cheap armor, and it is effective enough defensively that half an inventory of wines which cost 3gp each should be enough to do the job. In this way most of the risk may be with runes in which 50-60 casts are advised if using charge for all except Derwen, who may or may not need more because of the energy balls which heal him.

Upon killing Justiciar Zachariah, Porazdir and Derwen, they'll drop a Justiciar's hand, demon's heart and ent roots, respectively. Once you obtain one, run back to Kolodion so that he can hold it for safekeeping. If your supplies are low, it's best to teleport back to a safe location and restock on food and potions before giving the component to Kolodion. If you're killed and it isn't one of your protected items, you'll have to kill the follower again.

After collecting all three components, return them to Kolodion within the Mage Bank to complete the miniquest. After you have done so, you will be able to hand a cape to Kolodion which he will then imbue. To acquire another imbued cape, the player must find the corresponding follower to the cape that they wish to upgrade, kill it again for another drop and take it back to Kolodion. This means a total of five followers must be defeated in order to obtain all three imbued god capes.

The cape, like most untradeable equipment, is automatically protected upon death in dangerous PvM scenarios outside of the Wilderness. However, should a player die to another player in the Wilderness, the player will lose the cape, and the killer will receive 60,000 coins as loot.

On release, players instead had to kill three god-aligned demons, the Demon of Darkness, Light and Balance, and claim their hearts to finish the miniquest. However, the miniquest was criticised by players as being rushed and of lower quality than was to be expected from the Old School Team, for several reasons:

Amidst these complaints, Jagex released a newspost on 20 December stating that they are aware that the content was not up to the player's standards, with the post addressing the issues listed above, among other related content, with an expected rework of the miniquest coming in early 2018.

The miniquest was overhauled with an update on 8 February 2018, addressing all the issues listed above:

Retrieved from "https://oldschoolrunescape.fandom.com/wiki/The_Mage_Arena_II?oldid=8689456"
Community content is available under CC-BY-SA unless otherwise noted.