Irena just outside the

Shantay Pass. Ask her about her daughter until you offer to find her. After starting, unequip all of your

armour, and put on your

desert robes. Since you're in the hot part of the desert, your character will grow thirsty and take a drink of

water as time passes. Desert robes will make your water last longer, and you can refill your

waterskins by cutting cacti found around the desert with a

From the Shantay Pass, go south to find some footprints. Follow them until you reach some Mercenaries guarding the gate to the

Desert Mining Camp. Search the gate and use the "watch" option on the

captain, then talk to him. Compliment him and agree to do him favours until he asks you to kill an infamous bandit leader. Accept. Head directly west until you reach the

Inside the large tent, you will find

Al Shabim. Ask him about the bandit you're looking for, and he will tell you the bandit doesn't exist and send you back to talk to the Mercenary Captain again.

Tell the Captain that there is no bandit and insult him for not knowing as much to get him to attack you. Kill him and take his metal key.

Note: Unequip everything except your desert robes before going through the gate!

Getting into the mine

Unequip all armour and weaponry after defeating the captain, and before entering the camp. Inside the mining camp, wear only your

desert robes. If you decided to go through the gate with your weapon equipped, you will be put in a cell. Simply bend the bars in the window, and climb out. Once you've climbed out, climb the rocks, then the cliff, and then the rocks once more to escape the camp. You can enter through the gate once more. You may also be sent away from the camp and have your waterskins taken from you.

Once inside the camp, go into the building to the north, and search the table with a

bowl of water on it. You will receive a

Cell door key, which will save you time if you get caught in the upcoming sections; simply use the key on the jail door if this happens. You also can refill your waterskin from the bowl.

Exit the hut and run to the east wall by the rocks. Talk to the male slave. He will tell you that he's planning on making an escape. Tell him that it sounds interesting. Help him remove his handcuffs and switch his

Slave robes for your

Desert robes. Attempt to do this without a guard close by as you may be detained by the guards here and they will remove the Cell door key from your possession.

Warning: Once you have entered the underground mine area, do not remove your clothes around the guards or mention the key, or you will be jailed and forced to mine 15

rocks to be freed, to be handed in all at once. You will lose anything you dropped to make space. Teleporting out is possible.

Wearing the slave robes, enter the mine and follow the path until you come to a guarded cave opening (to save time you can click on the end of the cave directly below you on the minimap, to auto-run through the cave). Talk to a guard and tell him you want to mine in a new area, and he will request a

'Tenti' pineapple. Remove your slave robes to be sent to the jail. Getting sent to the jail may get your Cell door key or main gate key confiscated. Leave the camp. You can escape jail by bending the cell window, climbing out, climbing the rocks and cliff, and descending outside the camp.

Bedabin Camp and talk to

Al Shabim. He will agree to give you the pineapple if you get some weapon

plans for him, and gives you a key.

Go back to the Desert Mining Camp. (You might have to kill the Mercenary Captain to obtain the Metal Key again). Again, ensure that you have no armour or weaponry equipped upon entry. Enter the building to the north. Climb up to the ladder to where the captain is and search the southwest bookcase to learn he has an interest in sailing. Try to open the chest and he will notice you, and you'll be given a number of options on how to distract him.

This will get him distracted enough for you to search the chest. After you have the plans, go back to the

Al Shabim (Use the plans on him). He'll give you permission to use the

anvil nearby. Enter the tent directly north of Al Shabim, near the magic carpets and use your

bronze bars on the anvil to create some

dart tips. Then add the

feathers to make a

dart. You may fail and lose your bronze bar. Take this back to Al Shabim and he will give you some of the darts and the

Note: You can now make your own darts!

Head back down into the mine and give the

Tenti pineapple to the guard who wanted it. He'll now let you inside. Walk further down into the mine until you find yourself in front of a mine cart. Nearby, search the barrels until you can pick one up as you'll need one later. Then, get into the cart by searching it, and ride it to the other side.

Note: It is possible to fail this stunt and take damage.

Once there, go down the north-west path, and you'll find

Ana. Use the barrel on her, then head back to the mine. Do not tell her you have the key or else the guards will overhear you. (Do not talk to her at all or drop her while she is in the barrel; she will alert the guards).

Ana in a barrel into the mine cart and send it down the track before getting in and riding down to the other side after her. Search the barrels and you'll automatically find and retrieve the one that has

Walk to the winch bucket, put the barrel on it, then the guard nearby will help you hoist it up. Whenever you get a chance, make sure to compliment the guard in some way to avoid being caught.

Head back to the surface again and go to the winch in the southwest corner (Do not take off your slave robes as you will be thrown in the underground cell and forced to mine 15 rocks). Operate it before searching the nearby barrel to retrieve Ana. Then, go put her in the cart nearby. Now, you need to talk to the cart driver.

Warning: If you attempt to exit the mine with

Ana still in your inventory then the guards will discover her, jail you and you will need to start the Rescuing Ana section again.

In order to get out, tell the cart driver the following phrases:

Search the cart and get on it. Bribing him also works, but it costs 100 coins.

Irena, and she'll reward you for all your hard work. 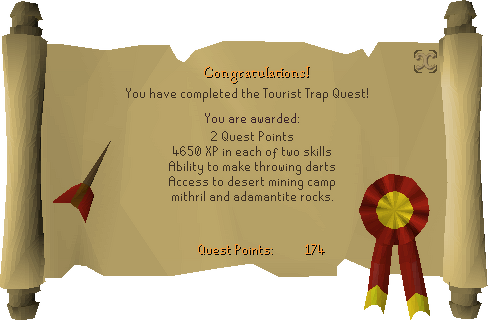