Start a Wiki
This article is about the book. For the hidden realm, see Shadow Realm.

Research notes on the shadow realm. 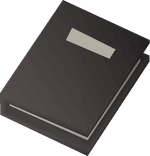 The shadow realm is a book obtained from the Grand bookshelves in Verzik Vitur's treasure vault beneath her throne room, which can be accessed after defeating her in the Theatre of Blood.

The book details the experiments performed on Sotetseg and how the author manipulated it to travel into the Shadow Realm.

Lord Drakan has tasked me with learning more about the shadow realm and to aid in this task, I've been given a dark beast. The creatures[sic] natural connection with the shadows should make the task far easier.

Success! The creature has managed to connect to the other side and early telepathic intrusions show that they've made contact. It's too early to say who wishes to communicate with us but the connection will be stronger next time, I'll just need to make some alterations to the creature

Incredible! My alterations were just what was needed to give the creature more power to move freely beyond realms and it has returned with yet another message.

Peculiar non-sense, but I assume there must've been some kind of interference. Perhaps the owner of this voice has been trapped on the other side? I'll send the creature back, but with a message!

Perfect! The creature has managed to gather an answer from the other side, but again the answer has been mangled into obscurity. I believe everything is in place now for the final practical test! I will travel with the creature and ask this mysterious being about the secrets of the shadow realm. Lord Drakan will be most impressed with my findings, I can already taste the blood prize and it is delicious.

Retrieved from "https://oldschoolrunescape.fandom.com/wiki/The_shadow_realm?oldid=8689762"
Community content is available under CC-BY-SA unless otherwise noted.