An old journal written by Lord Drakan himself. 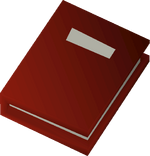 The wild hunt is a book obtained from the Grand bookshelves in Verzik Vitur's treasure vault beneath her throne room, which can be accessed after defeating her in the Theatre of Blood.

The book is written by Lord Lowerniel Vergidiyad Drakan, and it tells of his desire to hunt down Xarpus from his homeworld of Vampyrium.

There is beauty in chaos. Of this, there is no greater example than Vampyrium, my home. Ever since I left, I have dreamt of my eventual return. Now, millennia later, I am finally here. The world is just how I remembered it. With its blood-red sky and forests of darkwood, it is a beauty unlike any other.

I did not just come here to admire though, for today marks the first step in what will eventually make things right. For too long, my people have been softened by the Stranger from Afar and his false ideals. They are no longer hunters, but instead, mere farmers. Soon however, I shall teach them to embrace our heritage and remind them what it means to be a true vampyre.

First though, I have some unfinished business to attend to. There is an old friend who I left waiting for far too long. Before the Stranger from Afar domesticated us, our people were hunters unlike any others. No creature on Vampyrium could match our strength or our cunning. No creature, except one. the Yarasa.

The Yarasa were our true equal. Strong, fast, and unpredictable. They made for the ultimate hunt. Alas, the Yarasa were amongst the many casualties of our domestication. Before our domestication, we were a divided people. But with unity under the eight tribes came a power we had never before experienced. We massacred the Yarasa with ease, their strength no match for our superior numbers.

I have many regrets, but none more so than the events of that day. It was no hunt, just a joyless slaughter. It was our first step towards what we have become now, and I am filled with self loathing for my role in it. However, today is not about self loathing. Today is about one thing, and one thing alone. Today, for the first time in millennia, the hunt begins again.

While most of the Yarasa fell that day, there were some who managed to evade our slaughter. Most of these were drawn out and killed soon afterwards. However, there was one who managed to defy us right up to the day we left Vampyrium. Xarpus, the last king of the Yarasa. The Yarasa were a formidable foe, but compared to Xarpus, they were no foe at all. He is the apex predator of Vampyrium and he is my target.

I had no doubt that he would have survived all these years. With the rest of his kind dead and most of the vampyres having left the world. he has had little competition. Still, I don't expect he will have grown weak. Like me, he has waited a long time for this day. At long last, I will face a true foe again. At long last, I will feel the joy of the hunt again.

I have not allowed myself to fall victim to the sloth and gluttony that has taken hold of the rest of my people. I should still have the strength to take on this challenge. However, if I should fall, let it be known that I am finally free again. I spent too long a slave to the Stranger from Afar, too long a slave to myself, but no more. Let the hunt begin.

Retrieved from "https://oldschoolrunescape.fandom.com/wiki/The_wild_hunt?oldid=8689734"
Community content is available under CC-BY-SA unless otherwise noted.