The Theatre of Blood is a large arena located beneath the castle of Ver Sinhaza. It is used by the ruling vampyres to host blood sports. Here, the citizens of Meiyerditch are encouraged to go to the theatre and fight against the various experiments and abominations contained within, with the promise of freedom from the blood tithes and the right to leave Morytania should they succeed. The reward is revealed to be a ruse as the vampyres are unwilling to let go of their primary food source.

While the theatre is only open to citizens of Meiyerditch, this rule is rarely enforced. The vampyres are more entertained by outsiders than the citizens themselves, seeing as these are better prepared compared to the civilians who are inexperienced and poorly equipped.

Wave complete (link)
The jingle that plays once a boss has been defeated.

The Theatre of Blood is a linear raid. Thus, there is no randomization involved, and the bosses will always be encountered in this order.

Despite some of the bosses being spiders, vampyres and dark beasts, they will not count towards a Slayer assignment when killed inside the Theatre; thus, the slayer helmet and black mask bonuses have no effect.

Death within the Theatre

If players die within the theatre, they are placed outside the fighting area, and can only proceed if other team members succeed in completing the current challenge. If the entire team is killed, players will lose all unprotected items; these can later be reclaimed from a storage chest (similar to Torfinn's item storage) for a cost of 100,000 coins. Untradeable items that are normally kept on death will be placed in the item reclamation chest upon complete team death in the theatre.

If players die a second time without reclaiming the items in the chest, they will be permanently lost, unless the death occurs within a minigame deemed safe, such as Pest Control.

Dying in the Theatre of Blood is a dangerous death - Hardcore Ironmen who die within the theatre will lose their Hardcore status, regardless of whether the team successfully completes the challenges or not. Any disconnection or logout during a fight is treated as a death, and will likewise result in loss of Hardcore status. Should a player logout when not in an encounter, such as in the hallways of the theatre, the player's death will be treated as a safe death. Upon logging back in to an unsafe death, the game will attempt to reunite the player with their party and, if successful, will place the player in purgatory. If unsuccessful, the player will be treated with a full death and will have to pay the item reclamation fee to retrieve any items lost.

All normal forms of teleportation within the Theatre are blocked; however, the Mysterious Stranger outside sells Verzik's crystal shards for 75,000 coins each, and is the only item players can use to teleport away from the Theatre safely.

Players can spectate other teams in the Theatre of Blood by attempting to enter the theatre, or by speaking to Abigaila, a Morytanian refugee who can be found upstairs in the Lumbridge General Store or near the spirit tree north-east of the Grand Exchange.

In order to spectate, players cannot bring any items with them, excluding the oculus orb, and they must not be poisoned or diseased.

As of an update on 21 June 2018, players can right-click the ledges to view the fight in a better perspective. Players can rotate the camera clock-wise or anti-clockwise via the chatbox.

Upon defeating Verzik Vitur, a trapdoor will open under her throne, leading to her treasure vault.

There are five large chests, with each player being able to loot one chest. An arrow will point to which chest is for that player to search.

If a unique reward is obtained, a purple aura will emit from the chest, much like how the ray of light turns purple for the player who obtains a unique reward in the Chambers of Xeric. If no unique reward is found, players obtain up to three different common rewards instead depending on their performance.

Players can also search the Grand bookshelves in the treasure vault to find six books:

All non-stackable items obtained are in the form of bank notes, unless it is a unique reward. If the player obtains a unique reward, it will replace all common rewards. If not, the common reward table is rolled three times, possibly granting the same reward multiple times.

Upon entering the treasure vault, players may read the strategy table by the grand bookshelves to view the overall performance of the team, while spectators can read the war table to view it.

Here, players may view the death counts of each team member, the total deaths in the performance, as well as the time spent in each wave.

The Most Valuable Player (MVP) is listed on the top of the interface, and is determined based on the performance of the individual player, such as damage dealt and the number of deaths.

The challenge time (the time spent fighting the bosses) and the overall time, which includes the time spent between waves, can be seen on the bottom of the interface.

An official records page exists, which shows all-time global records, such as most completions by an individual and total Hardcore Ironman deaths within the theatre, as well as fastest completion times for each boss and the raid as a whole.

Artwork of the Theatre of Blood

Some early paint-overs of the Theatre of Blood

Artwork of The Maiden of Sugadinti

Artwork of Xarpus
Add a photo to this gallery

Placeholder graphics while testing the generation of Theatre of Blood dungeons

Placeholder graphics while testing the entering of Theatre of Blood dungeons

A screenshot of the Ver Sinhaza bank, shown during a livestream on 22/02/2018

A screenshot of the Theatre of Blood recruiting board, shown during a livestream on 22/02/2018

A screenshot of the Theatre of Blood entrance, shown during a livestream on 22/02/2018

A screenshot of a room within the Theatre of Blood, shown during a livestream on 22/02/2018

A teaser from Mod Ry showing the nylocas nest

A teaser showing a room within the Theatre of Blood

A screenshot of an early wire frame of Sotetseg's arena. 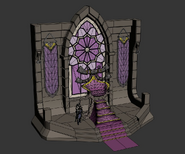 A screenshot of a glitched Sotetseg model, with a work-in-progress environment as a background
Add a photo to this gallery

A work-in-progress model of The Maiden of Sugadinti

A completed set of animations for The Maiden of Sugadinti

A teaser showing the idle, attacking and death animation of a Nylocas Hagios

A teaser showing the idle, attacking and death animation of a Nylocas Toxobolos

A teaser showing the idle, attacking and death animation of a Nylocas Ischyros

A completed model of Xarpus

A preview of Sotetseg's walking animation, shown during a design stream on 26/04/2018

Retrieved from "https://oldschoolrunescape.fandom.com/wiki/Theatre_of_Blood?oldid=8693121"
Community content is available under CC-BY-SA unless otherwise noted.