• The Knight's Sword
• The Giant Dwarf 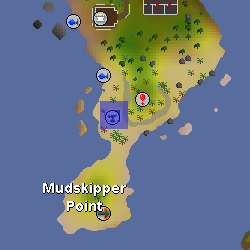 Thurgo, the supposed last of the Imcando dwarf race, is found outside the Asgarnian Ice Dungeon, south of Port Sarim, and just north of Mudskipper Point. He is a master of Smithing and players who have achieved level 99 in Smithing can purchase the Smithing cape from him for 99,000 coins. Additionally, he is one of the main characters encountered during the The Knight's Sword quest.

Thurgo lives in a small hut right by the Asgarnian Ice Caves, in which a player who's doing The Knight's Sword quest must talk to him to create a blurite sword for Sir Vyvin. Thurgo will only help the player out if he was given a redberry pie. After that, he'll request a picture of the sword, then a chunk of blurite ore and 2 iron bars to make the sword, in which the player will give in the sword and complete the quest.

Thurgo plays a partial role in the quest, where he will fix the dwarven battleaxe for you with an iron bar. If a player hasn't completed The Knight's sword quest, they will need to give him a redberry pie first. If it has been completed, then you don't have to give him another pie.