A half torn necromantic page. 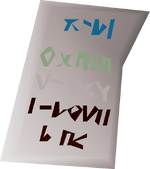 The torn page is found on a broken lectern in Jiggig during the Zogre Flesh Eaters quest. If the player reads it, the player will discover that it was used to place a curse on the area, raising the dead "for all time"; the player will also find a guild emblem on it, a clue that it relates in some way to the Wizards' Guild in Yanille.

The page has been torn from the necromancy book, which can be confirmed by using it on that book. In combination with other evidence, it persuades Zavistic Rarve that Sithik Ints might have had something to do with the curse. He then assists the player to catch Sithik.

If the player drops the torn page after showing it to Zavistic Rarve, it cannot be re-obtained. However, the player will still be able to receive the strange potion if all of the other pieces of evidence are shown to him.

Retrieved from "https://oldschoolrunescape.fandom.com/wiki/Torn_page?oldid=8210196"
Community content is available under CC-BY-SA unless otherwise noted.