View source
RS
This article is about the quest. For the building, see Tower of Life (building) and for the basement, see Creature Creation.
Old School RuneScape uses the British convention for floor numbering: Ground floor, first floor, etc.

Tip: Bring a raw swordfish and raw chicken if you want to complete a medium task in the Ardougne Diary, for which you have to kill a swordchick in the Tower of Life after completion of the quest.

Begin the quest by heading to the Tower of Life south of East Ardougne, just southwest of the Necromancer Tower (southwest of fairy ring DJP, or Ardougne cloak teleport to the monastery and go east).

Fixing up the tower

Once the pressure machine is built, turn the left wheel to the left until the ball plugs the hole, then to the right until the pipe fills.

Then, pull the left lever, turn the 2nd wheel from the left to the left until the ball plugs the hole, and then to the right until the pipe fills.

Next, pull the right lever, then turn the right wheel to the right until the water starts dripping; turn the wheel left once to plug the hole.

Finally, turn the right wheel to the right until the pipe fills. You will receive a message saying the machine is fixed.

You will need to solve a rather simple puzzle similar to a jigsaw. As soon as you put a pipe in the correct location, it will lock in place. You only have to rotate the largest piece, the rest are the correct orientation when you start.

Clicking the horizontal or vertical button will make a bar appear. It can increase in size by using the + sign. The bars start off at size one once selected. Click "place bar" and it will go in. If it disappears, redo the steps with the next size up.

It is helpful to remember each "square" of the cage is composed of 2-length pipes. So a missing pipe spanning 1½ squares would need a pipe of length 3.

When each side is finished, turn the cage with the right arrow.

That side of the cage is now complete.

That side is now complete.

The cage should now be complete! 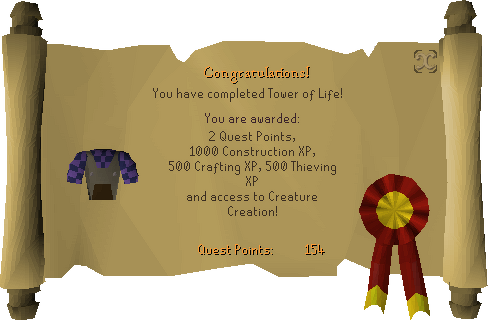 Completion of Tower of Life is required for the following: