This article covers the quest; see Creature Creation for the basement area.

This article has a quick guide, which can be found here.

Fixing Up the Tower

Turn each wheel left until the ball plugs the hole, then once plugged turn wheel to right until pipe is filled with water. It will say it is fixed in text window. Two wheels need the lever down to operate.

You will need to solve a rather simple puzzle similar to a jigsaw. As soon as you put a pipe in the correct location it will lock in place. You only have to rotate the largest piece, the rest are the correct orientation when you start.

Clicking the horizontal or vertical button will make a bar appear. It can increase in size by using the + sign. The bars start off at size one once selected. Click "place bar" and it will go in. If it disappears, redo the steps with the next size up.

It is helpful to remember each "square" of the cage is composed of 2-length pipes. So a missing pipe spanning 1 1/2 squares would need a pipe of length 3. 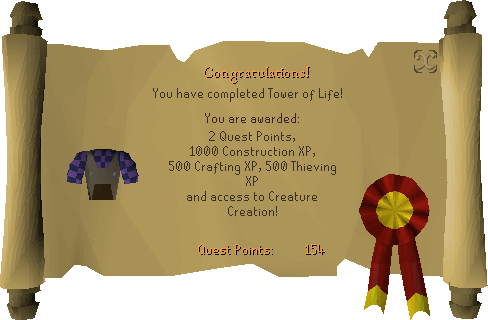 "In the basement of the tower of life you'll find the homunculus; he's crossing a lobster with a jubbly! A spider with a sardine! A newt with a rooster!"

Retrieved from "https://oldschoolrunescape.fandom.com/wiki/Tower_of_Life?oldid=283511"
Community content is available under CC-BY-SA unless otherwise noted.