Inventory: Nice bit of crafting!
As a follower: An amazing piece of crafting.
Loading... 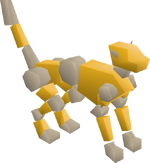 A Crafting level of 85 is needed to construct the cat, giving 15 experience points.

The cat may be "released" to follow players around like any regular cat. However, it can not be fed, catch rats, be petted, be spoken to or be used as a substitute for a real cat in quests. The clockwork cat does not require any maintenance and will only disappear in the event of the owner's death.

Toy cats are the only type of pet which can be traded with another player. In addition, players do not have to complete the Gertrude's Cat quest in order to have the clockwork cat follow them.