It's a gnome who specialises in covert operations. 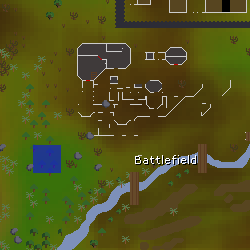 The Third tracker gnome, known in game as Tracker gnome 3 is a member of the Gnome royal army, sent to obtain the co-ordinates of the Khazard forces Headquarters in the Battlefield south of West Ardougne. The Third gnome can be found in the south-western corner of the Khazard stronghold, amongst the battle. He is encountered in the Tree Gnome Village quest to get part of the coordinates of the battlefield so the gnomes can fire the ballista. This tracker, however, has been driven mad by the constant and unrelenting fighting, and now only speaks in riddles and frightened gibberish.

Retrieved from "https://oldschoolrunescape.fandom.com/wiki/Tracker_gnome_3?oldid=8210160"
Community content is available under CC-BY-SA unless otherwise noted.