This article contains all the possible clues when doing clue scrolls. For clues related to a specific clue scroll, see Treasure Trails/Full guide

Clue scrolls are generated primarily by monster drops, but also can be generated through Thieving, and as certain activity rewards. Each level of clue has a very different set of possible rewards and items, and hazards, so it is worth knowing what the player is in for.

NOTE: You are no longer required to own a sextant, watch, or chart in order to complete coordinate clues. Alongside the above mentioned items, for these types of clues, you will often need some additional tools:

Hard, elite, and master clues will often encounter various wizards and guardians that may prove difficult to fight. Therefore, the following items are recommended:

Having a high amount of quest points is beneficial when doing Treasure Trails. Many higher-level trails will lead a player into areas, which are locked by quests. If this is the case, the player must do the quest, up to where access to the area is granted, if they wish to complete their trail. If the player hasn't done the needed quest yet, but they have the requirements or are in a position to get them quickly, it is recommended that the player (trains and) does the quest, rather than getting rid of the clue scroll.

Ciphers are a method of encrypting information. In Old School RuneScape, ciphers are used as a step in a Treasure Trail. They use a Caesar Shift in order to encrypt a NPC's name. 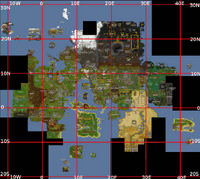