During a Treasure Trail, a coordinate clue is a clue scroll that contains a set of coordinates. Much like the real-world longitude & latitude geographic coordinate system, coordinates in RuneScape indicate a precise point somewhere on the surface where the next clue scroll, or potentially the treasure casket, is buried. Coordinate clues will only appear in Treasure Trails of medium difficulty or higher. The coordinates are presented in the following format:

After receiving a coordinate clue, players must travel to the exact position (more precisely, the exact square) that the clue scroll indicates. Prior to an update, this used to be done using a chart, sextant and watch; however, these items were not required to be able to dig up a coordinate chest. Players must have a spade in their inventory. The next clue, or the treasure casket if the Treasure Trail is complete, can be dug up with a spade. Coordinate clues may take players all over RuneScape, to nearly any geographic region in the game (including the deepest levels of the Wilderness), although coordinate clues will never point players underground or into dungeons or buildings.

The following map may be used to roughly determine the location of a given coordinate clue: 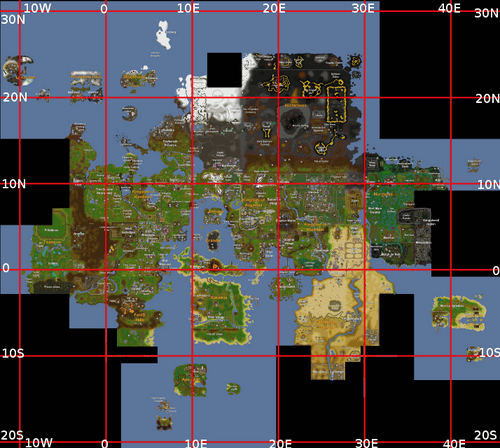 However, precise descriptions for each coordinate clue are listed below.

Note that some of the clues may require skill or quest requirements before you will be able to get to that location. These quests, which must be finished or partially completed, include: Bone Voyage, Regicide, Legends' Quest, Nature Spirit, The Grand Tree, Fairytale II - Cure a Queen, Troll Stronghold, Cabin Fever, The Fremennik Trials, and Watchtower. Some coordinates will also require a certain skill levels to complete the clue, though the required level is low.

Retrieved from "https://oldschoolrunescape.fandom.com/wiki/Treasure_Trails/Guide/Coordinates?oldid=5670572"
Community content is available under CC-BY-SA unless otherwise noted.