Old School RuneScape Wiki
Register
Don't have an account?
Sign In
Advertisement
in: Cities, Locations, The Grand Tree,
and 2 more

View source
watch 02:58
No Man's Sky Update - The Loop
Do you like this video?
Play Sound
RSCRS
This article is about the stronghold. For the village, see Tree Gnome Village. 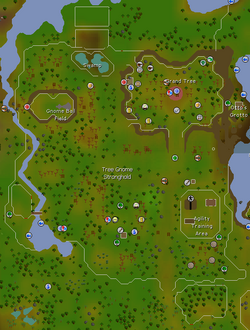 The Tree Gnome Stronghold is the gnome capital city. It was added along with the Agility skill, and remains the first training area for the skill. It is one of the largest cities in RuneScape, spanning quite a large area despite being sparsely populated.

There are no requirements to enter the stronghold and helping Femi does not begin a quest.

First floor of the Grand Tree

Second floor of the Grand Tree