Trident of the seas

Trident of the seas

Uncharged: It needs to be charged with death runes, chaos runes, fire runes and coins.
Charged: A weapon from the deep. 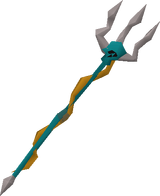 The trident of the seas is a trident-class magic weapon requiring 75 Magic to wield. They are obtained as a rare Slayer task drop from cave krakens or krakens with level 87 Slayer. An uncharged trident is dropped by the normal cave krakens, while the boss kraken can drop a fully charged trident. Similar to Barrows equipment, the trident is only tradeable when either uncharged or fully charged.

The staff has a built-in magic spell that can be used regardless of the spellbook the player is using, although it cannot be used to autocast any other combat spells. The spell gives no base experience and grants the player 2 Magic experience per damage dealt.

In order to use the trident's magic spell, it must be charged with various runes, holding up to 2,500 charges when fully charged. Charging the trident requires level 75 Magic.

Any remaining charges within the trident can be removed at anytime to recover the runes; however, the coins will not be refunded.

If a player dies with the trident, only the uncharged trident will appear on the floor (if it's not protected on death).

The max hit dealt by the trident is dependent on the player's current Magic level, starting at 20 with level 75 Magic and increasing by one every three Magic levels, up to a maximum of 31 at level 108 (obtainable only through super magic potions in a Nightmare Zone dream or with the Imbued heart). Both magic damage bonuses and stat boosts will modify the max hit of the spell; likewise, stat-reductions will lower the damage, but the minimum max hit will never fall below 20, even if the player's Magic level is reduced below 75.

Players can give an uncharged trident and 10 kraken tentacles to Lieve McCracken to create an enhanced trident of the seas, which holds 20,000 charges instead of 2,500.

Players with level 59 Crafting can attach a magic fang to the trident using a chisel, creating a trident of the swamp. This enhances its magic attack bonus, and has the ability to infect a target with venom. However, to take advantage of those benefits requires using Zulrah's scales instead of coins to charge the trident. Players can attach a magic fang to an enhanced trident.