Start a Wiki
RS
Not to be confused with trolling. 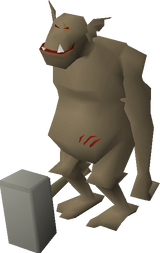 Trolls are one of the more unique, though not very intelligent, races of Gielinor who mainly inhabit the Troll Country. Whilst the main population exists within the mountainous region known as Trollheim, the race is quite widespread, populations being known to stretch as far as Piscatoris, Neitiznot and Weiss; populations of river trolls are also known to exist near most popular fishing spots.

Trolls are typically named after whatever they first attempted to eat, so it is not uncommon for trolls to have strange names. Their weapons are rather crude, but are effective in combat. They often wield clubs, axes, and rocks for throwing, though a few may use other weapons, such as scimitars.

They are something of an oddity when compared with other races such as humans or gnomes. Trolls are split into several different types, which all differ from each other greatly. It is not currently known if these are different species of troll or different breeds. These differences reflect the troll race's hardiness, and ability to adapt to a number of extreme environments, although all trolls share some similarities such as their rocky appearances, their thick skins, and their relatively low levels of intelligence, although there are some outliers such as Odd Mushroom, who is much more intelligent than a typical troll, and can speak grammatically correct English.

Trolls which dwell in caves and rock-like faces, such as Death Plateau and the Troll Stronghold are known as mountain trolls. These are the most prosperous and numerous of the troll races. Important and notable trolls are generally from this breed and, though some mountain trolls are weaker than other breeds, they appear to be among the more resourceful, as they construct equipment from bone and granite, along with having a primitive society, such as guards, cooks and farmers. In addition to throwing rocks at anyone who would travel through their lands, these trolls devour humans and are known to put them in stews and eat them alive. While they like to eat humans, they will also eat goats if there are no humans to be found.

Goutweed is a delicacy in mountain troll cuisine.

The other mountain-dwelling trolls which live in the harsher and colder regions, such as on Trollweiss Mountain, are known as ice trolls. Ice trolls are some of the most vicious and powerful of the trolls, violently attacking various civilisations on different fronts, such as the Fremennik isles of Jatizso and Neitiznot. This tribe of ice trolls, it is worthy of note, have more of a leader-figure than mountain trolls or Trollweiss mountain ice trolls, called the Ice Troll King. Ice trolls usually use wooden clubs, bones, and large rocks to fight, though they wield them with great accuracy and power.

Another group of ice trolls, led by Mother, were driven out of Keldagrim and settled in Weiss. These trolls are much more unique compared to the other ice trolls as they have a much larger and intimidating build. They also have a greater hatred of humans, as a young Wise Old Man assisted the dwarves of Keldagrim in driving them out. However, this hatred seems to have dissipated once Mother's daughter, Snowflake, takes over. The ice trolls of Weiss also take advantage of the various salts beneath their city, using it to create fire pits that provide various effects.

According to the troll child during Desert Treasure, when angry or upset, ice trolls are able to freeze the air around them. Whether this is a trait unique to the Trollweiss ice trolls or ice trolls overall is unknown.

Another lesser-known race of trolls, an aquatic species which dispersed all over Gielinor, are the river trolls, which were a discontinued random event, popping up in various fishing spots all over the rivers and seas on the coasts of Gielinor. They held large bones and attacked with melee, often dropping different types of raw fish. They can now be found in the Enchanted Valley.

Perhaps the most powerful and alarming species of troll is the elusive sea troll. Sea trolls are as vicious and nasty as their icy brethren, but they are far more organised and less primitive than any of the others. The majority of sea trolls wear and wield very little, only wooden clubs and odd armour fashioned from shells and old ship parts, mostly barrels, an act only repeated by the troll generals of the Mountain Troll Stronghold. Sea trolls are only found at the Piscatoris Fishing Colony, but it is assumed they dwell all over the waters and islands of the Northern Sea. Like the ice trolls, sea trolls have a leader of sorts, though it resembles more of an deep sea creature.

Retrieved from "https://oldschoolrunescape.fandom.com/wiki/Troll?oldid=8698063"
Community content is available under CC-BY-SA unless otherwise noted.