The mountain map on the right shows a number of relevant locations for the Troll Romance quest:

In the remainder of the walkthrough, the map numbers will be referenced in the relevant parts of the text.

Ug can be found inside the stronghold. To get to the stronghold, use the Trollheim Teleport or walk, or use fairy ring code AJR and walk to the western entrance in the mountains. From the teleport location (1 on the map), go to the south/west path. Walk past some trolls, and take a ramp on the northwestern side of that area (2 on the map). After entering the stronghold, use the stairs at the northern side of the corridor. Once down, take the southern corridor. At the end of the corridor, go through the door leading west. Ug is in the southern part of the room. Talk to him to learn that Ug is very much in love with Aga, who, unfortunately, loves Arrg. After Ug, go to the room north of Ug to talk to Aga. She is a very romantic troll and expects to receive trollweiss from her love. Talk to Arrg to discover that he does not seem to be very much in love with Aga and also has no knowledge of the trollweiss location. The solution for Ug is to find some trollweiss so that he can win the love of Aga.

Go talk to Ug again. He says that one who has lived their whole life in the mountains would know where to find Trollweiss. A person that is knowledgeable about the mountains is Tenzing. He lives on the path from Burthorpe to the stronghold (4 on the map). Tenzing also sells climbing boots. Use the games necklace or Minigame Group Finder to teleport to Burthorpe. From the teleport location, go west and then northwest up the path. At the wounded soldier, go southwest on the winding mountain path to Tenzing's hut (4 on the map).

Tenzing explains that trollweiss is in the ice troll area and a unique method is needed to go down to the plateau where the trollweiss grows. He also mentions that a sled may be useful for getting to that plateau and that Dunstan knows more about making a sled.

Warning: Make sure to talk about the sled before leaving!

Dunstan is the Burthorpe smith, so use a games necklace or the Minigame Group Finder to return to Burthorpe. Dunstan's house is northeast of the Burthorpe Games Room building (5 on the map). Talk to Dunstan, and he will make a sled provided he gets the materials (maple or yew logs, an iron bar, and rope). Dunstan also talks about waxing the sled before it can be used in the mountain snow.

With an empty cake tin in your inventory, use the swamp tar with the bucket of wax to get wax (in the cake tin). Use the wax on the sled to make a waxed sled and making it possible to ride it. The next task is to go up Trollweiss Mountain.

The sled needs to be used to go down Trollweiss Mountain. Return to Trollheim using the Trollheim Teleport spell, or make the longer walk. Exit the Trollheim maze on the western side, but now, take the path leading northwest, which is located north of the path to the Troll Stronghold. Follow that path north, and keep west to a dungeon entrance that faces east (6 on the map). The cave does not show up on the minimap and can be hard to find; once you get as far north as you can and see ice gates and the troll child, look west for two rock slides, walk in between these, and go northwest to the cave. (Do not enter the ice gates as the cave is to the west, not east!) It will also be snowing around the area that the cave is in.

Warning: Do not spend too much time standing in the snowing area or all your stats will slowly decrease by 1.

When outside, walk south past the wolves to an opening in the rocks at which point you can walk no longer. Ride the sled due south, and watch the cutscene. After you stop, do not ride again. You'll see the circular area with a red dot, unequip the sled and walk in. Do not go all the way south on your sled! If you do, you will have to make your way back to the sledding path, but ride the path once away from the area with wolves.

Southwest from the end position of the sled ride in a circular area with a central rock (easy to see on minimap) is a flower patch with trollweiss. Pick some flowers. Return to Ug, who is very glad with the flowers, but he is afraid of Arrg, so he cannot give Aga the trollweiss. The only option is to kill Arrg.

Go to the room north of Ug where Arrg is still around. Prepare for battle before talking to him. Protect from Melee is very useful, but Arrg can partially hit through it. Like most trolls, Arrg has very high strength for his combat level, and he has a max hit of 38. Talk to Arrg. When Arrg learns that you want to kill him, the big fight starts. A teleport causes the fight to take place in the Troll arena (7 on the map). Arrg attacks immediately after the teleport, so be prepared. Arrg has a strong melee attack and can hit through protection prayers. He can also throw rocks, so keep switching prayers to avoid getting hit hard.

Arrg can be safespotted at the west gate of the arena. However, unlike Dad, Arrg is small enough to fit between the mountain walls and attack you. Therefore, Arrg must be lured to the raised land at the north-west of the arena. To lure him, turn on Protect from Melee, run to about the centre of the raised land, and wait for Arrg to catch up. Once he is on the raised land, run to the gate and he should get stuck on the mountain wall. Now Arrg can not attack you at all and you can safely kill him with magic or ranged. Arrg disappears after a few minutes and he will reappear at the spot where Ug is, so even if you safespot him, you need to kill him quick.

Do not worry if you die, simply teleport to Trollheim or Burthorpe and collect your items. Arrg's health will stay at the level you died at.

Kill Arrg and return to Ug. Tell him about the demise of Arrg to complete the quest. 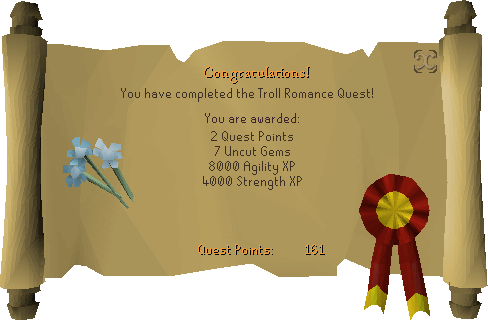