View source
RS
This article is about the quest. For the location, see Troll Stronghold (location).

Start this quest by speaking with

Burthorpe, located East of the

Warriors' Guild in the tent (South of the Burthorpe teleport from the Games Necklace). Tell him that you will help him out and find

Godric. After talking to Denulth, follow the path north-west, then going south-west when you reach the

wounded soldier, and reach Tenzing's house. Tenzing sells climbing boots for 12 coins each if you don't have them. Climb over the stile behind the house to begin the journey up the mountain. Follow the path until you see some rocks to the north. Put your boots on and climb over them. Then, go east and enter the arena. You will have to climb rocks several times before reaching the arena.

This is where players meet a huge troll called

Dad. He will say that nobody goes past without defeating him. He is level 101 and uses a tree to hit with

stunning them temporarily. Dad can be

halberd is a good Melee alternative). Note that Dad has high

Defence stats against Ranged and Magic, so it may take a little bit before you kill him.

When Dad is low on health, he will ask you to spare his life. Spare him and walk past to the gate north of the arena. Be careful as he may try to hit you still if you are in range. Note: If you don't spare his life, you can still continue the quest, although the audience will become aggressive and start attacking you!

Enter the cave north of the arena, and go past the level 69 and 71

mountain trolls. Beyond this is

Trollheim. There are level 68

thrower trolls who will range players here as they walk past the northern part of the mountain. You can avoid them entirely by taking a shortcut by climbing up the rocks, starting from the eastern region of the mountain and ending at the western side. Some of the shortcuts require 41- 47

Agility. If you do not have this Agility level, run around the mountain and activate

Protect from Missiles around the northern bend to avoid taking too much damage from the trolls to get to the Western portion (Avoid the Northwest portion going towards the Godwars Dungeon).

Go west of Trollheim and north past several mountain trolls. Enter inside the

mountain trolls. From the entrance, walk south until you see a door on the west wall. Enter and walk north. You will see several

troll generals (level 113). They wield huge granite knives and mauls which can hit up to 38. Kill one to get a

Protect from Melee or

Magic. The southern-most General can be safespotted easily by standing on either side of the desk in his room. Like

Dad, it may take a while if killing with Ranged or Magic as they have a high defence against both.

Once you have the key, go back south, down the stairs arriving in Burntmeat's Kitchen, and then go to the very north end of the

Stronghold. Enter the locked door with the prison key, and climb down again to reach a jail. Head west and south, and you'll see two sleeping prison guards called

Thieving, pickpocket both to get

Cell key 2. (Beware, if you fail to pickpocket one, they will still attack you!) If not, kill them for the keys. You can

safe-spot both trolls by standing inside one of the vacant cells. Free both

Godric with the keys; then, exit the prison by going south to the secret exit.

Head south-east and climb over the rocks, you can use the minigame teleport or use a

games necklace to return to

Burthorpe. Go to the north-east corner of the city, and talk to

Dunstan for your reward. 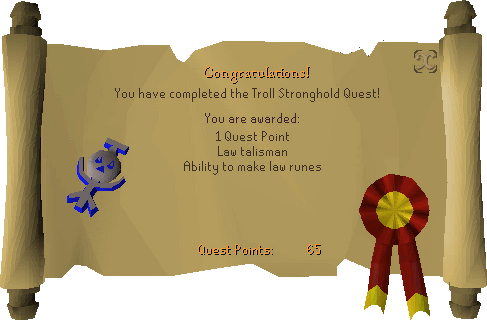