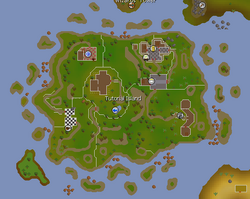 Every new RuneScape character starts out on the Tutorial Island. For new players, this is a place for you to learn the ropes, while those creating new characters can begin to fine tune them here.

Watch for the map symbols on the minimap, as learning those will help players find their way.

The RuneScape Guide teaches players some basics; if they are still stuck, they should always try right-clicking if they cannot achieve the desired result with a left click, and remember that they must use a "talk to" action to communicate with any non-player character.

Players will learn how to:

At any point, if players have not made the required response within a reasonable time, they will be prompted as to their next action.

The Survival Expert gives players the basics for Woodcutting, Firemaking and Fishing.

She teaches players how to view and use items in their inventory (pack), cut wood, light a fire, fish, cook and view their current skill levels.

The Master Chef teaches players the finer points of Cooking; in this case, making bread. At most Cooking levels, items that need to be made offer greater healing than fish, which can be cooked at the same level, but require multiple ingredients.

The Master chef also instructs players in controlling the game music and in running using their menu option.

The Quest Guide covers using the quest menu, and what quests are about.

The Mining Instructor, Dezzick, teaches players the basics of:

Progressing both Mining and Smithing to level 3 here is worthwhile, although players will have to mine a little more to get Smithing up to 3.

The Combat Instructor, Vannaka, discusses the different types of Combat. Pures should pay attention, as they can make their first bit of character tweaking here. Note that the combat instructor is also a Slayer master.

Players are given a bronze sword and wooden shield, and only at this stage are they allowed to enter the rat cage. Don't worry! No one can receive a fatal hit here, so food is not required.

The minimum requirement is to kill one rat, using any combat style you prefer, while the maximum is to train each style to the maximum level of 3, while gaining no Hitpoints - the essence of a pure character being able to maximise their strike while holding Combat level low.

NOTE: If you kill a rat you will be forced to continue the tutorial. If you want to train more it is suggested to deal 2 damage to a rat then run to the other side of the pit and repeat.

Trains players' Attack skill, governing the type of weapon they can wield and their chance of hitting. Since players can train this to 8 on the Varrock dummies later, also without Hitpoints, it is not important to progress this here.

Trains their Strength skill, increasing the potential damage of a successful hit. Since there is no other way to train this without also getting Hitpoints experience, this is valuable for a Melee pure.

Trains players' Defence skill, reducing the chance of being hit by attacks and allowing players to wear higher level armour.

Since Defence adds to Combat level but not players' damage output, pures often do without Defence altogether, although a "steel pure" would have level 5 Defence and wear full steel armour - not excessively expensive to lose and a fair bit better than iron armour, in return for being one Combat level higher.

Once players leave the cage for this, they cannot re-enter.

The instructor gives players a Shortbow and 50 Bronze arrows, and will give more arrows if they run out. Unless players are sure they will never use Ranged combat, train this skill to 3 here, as the arrows are free. Just like training melee, if you kill a rat you will be forced to move on, so switch after dealing 2 damage to each rat.

The Financial Advisor instructs players in using RuneScape's banks, and in some possible ways to make money.

Remember, both cash and items can be withdrawn from any branch, not just the one they were deposited at. Finding a bank to store items players are not currently using should be one of their first priorities on leaving the island.

Brother Brace instructs players in Prayer, although if they choose the path of a pure, they may choose not to acquire any, as Prayer also contributes to Combat level. The effect of high level Prayer can be devastating in Combat, but the low to mid-level prayers are mostly useful for Melee combat.

Brother Brace also instructs players in using the friend and ignore lists and in general conduct.

There is an organ upstairs which can be played.

Adam and Paul will introduce Ironman Mode - where players are self sufficient and are not allowed to trade, among other things. Players can choose to become regular ironmen or ultimate ironmen (where using a bank is forbidden) by speaking to Adam or Paul. Once a player leaves the island, they may revert to a standard player, or downgrade to a regular ironman if Ultimate ironman mode is chosen. Note that once the settings are chosen, players have one week to change their mind; once the week is over, players may not undo the changes.

The Magic Instructor instructs players in their spell list and spell casting, though practical Magic combat will require players to use a staff and set an attack spell for it.

The Magic instructor gives five air and five mind runes. If players drop them and talk to the instructor again, more runes may be collected. Repeating this to obtain 30 of each rune (collecting 5 previously dropped sets) enables level 3 Magic to be reached.

Players use the runes to cast Wind Strike against the chickens.

The Magic Instructor will transport you to Lumbridge with standard provisions. Players cannot take any extra items with them, and any standard items that they banked will be back in their inventory.

Players are now standing just outside the Lumbridge Castle, within the walled area, and will gain the ability to speak in chat and access the rest of the world.

Some players decide to make a separate account for sole purpose of staying on Tutorial Island (or creating a Tutorial Island pure). For now the things to do on the Island are very limited but it might change in the future updates.