RSCRS
This article is about the item used during The Grand Tree quest. For the monster, see Twig.

Twigs bound together in the shape of a T/U/Z/O.
Twigs are quest items used only in The Grand Tree quest. King Narnode Shareen gives all of the twigs to you. When placed on the pillars in Glough's house to spell out "TUZO" ("OPEN" in Old Gnomish), the trapdoor in Glough's house with open, and gives access to a secret passage into the roots of the Grand Tree.

There are four separate items, each bound in the shape of a different letter. The player must arrange them in the correct order on the barrels by the trapdoor in order to unlock it. After the quest, the trapdoor remains open, rendering the twigs useless. 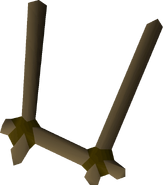 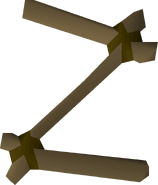 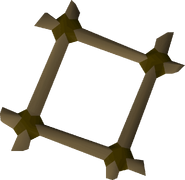 O twigs
Add a photo to this gallery

Retrieved from "https://oldschoolrunescape.fandom.com/wiki/Twigs?oldid=8210036"
Community content is available under CC-BY-SA unless otherwise noted.